(IDEX Online) – Jewelry sales during November – the first month of the all-important 2012 holiday selling season – were up a strong 8.3 percent, according to the U.S. Commerce Department. Sales at specialty jewelers rose by 8.2 percent while sales at other multi-line merchants who sell jewelry were up by 8.4 percent.

However, it is important to note that the government’s sales figures are preliminary, and, unfortunately, they are inconsistent with sales reported by individual jewelers in the IDEX Online Research sample of retailers. Thus, we expect November’s preliminary sales numbers to be revised downward.

We also note that the same situation happened in October: preliminary data showed that specialty jewelry sales jumped by 8.3 percent. October’s numbers have since been revised to a smaller gain of 6.5 percent. While that is still a solid increase, it is not nearly as robust as first reported.

Based on sales reports from specialty jewelers, we believe that 2012 holiday sales will rise by a more modest low-to-mid single digit range.

The graph below summarizes total jewelry sales trends by month in the market. These results represent sales by all merchants – specialty jewelers and multi-line retailers – who sell jewelry. 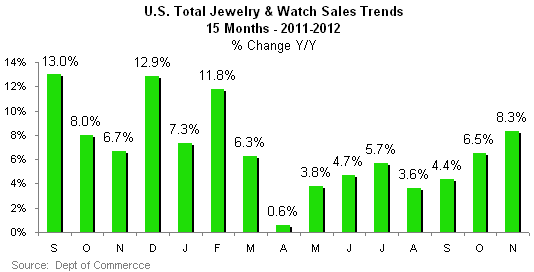 Here is what the data for November 2012 showed:

·        Total jewelry sales at all retail merchants rose by 8.3 percent, according to the Department of Commerce. This reflects a continued pick-up in consumer demand, after a relatively slow late summer sales period.

·        Specialty jewelers’ sales rose by a solid 8.2 percent, based on Commerce Department data. After nominal sales gains during most of the summer months, this is a positive change in trend.

·        Jewelry sales at other merchants who sell jewelry – mostly multi-line discounters – rose by 8.4 percent. Historically, shoppers have been shifting their jewelry purchases to multi-line merchants rather than specialty jewelers.

·        LGI Network sales showed a 2 percent gain in watch sales, which differed materially from government figures. The LGI sales data for branded jewelry showed a 15 percent gain in November, a divergence from the government data. Brands are very important during the holiday sales period.

·        Total retail sales rose by 5.1 percent in November, while “core” retail sales (ex-food and autos) rose by 4.1 percent. Jewelry gained share of wallet when compared to other retail merchandise categories.

o       Specialty jewelers’ sales were just under 43 percent of total jewelry sales in November, in line with trends earlier this year.

o       Retail sales trends accelerated in November in the market.

The following table summarizes full data about retail and jewelry sales in November 2012.

During most months in 2011, watch sales showed a greater sales gain than jewelry; in 2012, jewelry sales gains have been stronger than watches for nine of the first eleven months, as illustrated on the graph below.

Branded jewelry sales data from the LGI Network indicated that demand was very strong, as the red bar on the graph below illustrates.

LGI Network data for watches showed a modest gain, as the red bar on the graph below illustrates.

Here is what the retail distribution channel data shows for jewelry and watches in November:

·        Specialty jewelers posted a strong 8.2 percent gain in sales. This was only slightly below the overall sales gain of 8.3 percent for all jewelry and watches sold by any retail merchant.

·        Jewelry sales at multi-line merchants such as Wal-Mart, JC Penney, Costco, and others rose by an 8.4 percent in November. Shoppers want “value,” and specialty jewelers have not been able to develop a credible value offer. 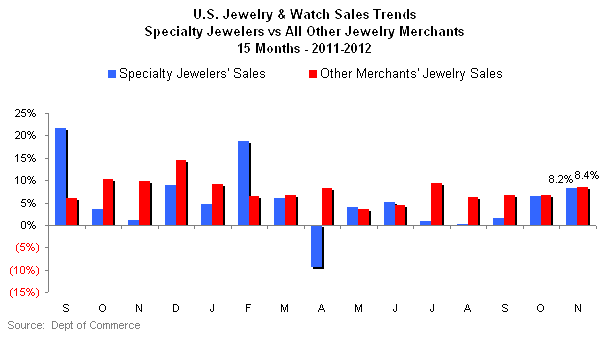 During 2011, jewelry sales gains were much stronger than total retail sales gains (all categories of merchandise), indicating that jewelry captured significantly greater share of wallet during the year.

Jewelry’s share of wallet has been vacillating during 2012: one month, jewelry takes market share from other categories, only to lose it the following month. Beginning in the first quarter, jewelry sales were drummed by total retail sales gains, as the jewelry category lost consumers’ share of wallet. This trend continued in April and May, and then reversed in June and July.

However, August results show that jewelry lost market share to other merchandise categories. In September, October and November, the balance shifted once again: jewelry picked up share of wallet with consumers. Uncertain consumers typically have uneven spending patterns, and this has been the trend so far in 2012.

·        When automobile sales – often driven by price-based promotions rather than any underlying need for a new car – are added into the equation, total retail sales rose by a more modest 4.1 percent in November, well below jewelry sales gains. 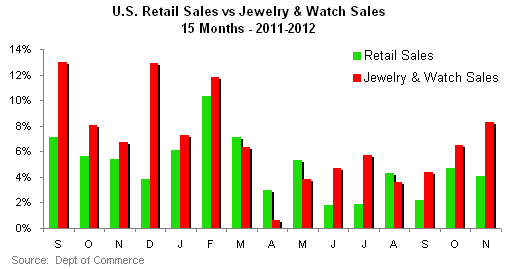 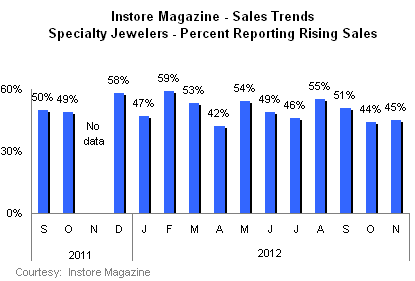 Worse, January 2013 jewelry demand appears to be off significantly. As one jeweler told us, “shoppers turned off their spending spigot on January 1.”

We continue to forecast that sales of fine jewelry and watches will rise by about 4 percent in 2012, when compared to 2011. While the percentage gain is modest, 2012 will be a record sales year for the American jewelry industry.

We are also forecasting a revised 3-to-4 percent jewelry sales gain for the 2012 Holiday Selling Season, when the final data is reported sometime in the second quarter of 2013.

Our preliminary sales forecast for the jewelry industry in 2013 is a gain between 3 and 4 percent.