The diamond engagement ring market in the U.S. is expected to remain more or less flat – in terms of units sold – for at least the next decade and perhaps beyond, according to a new forecast by IDEX Online Research.

The forecast for flat engagement ring sales in America is the result of new estimates that show the number of weddings in the U.S. market will likely remain level at about two million for the foreseeable future.

Forecasters had been calling for significant growth in the number of weddings in the American market over the next 10 years; this would also drive growth in demand for diamond engagement rings and related bridal jewelry. However, new data from the U.S. Census Bureau, the Consumer Expenditure Survey and the National Center for Health Statistics is much more bearish for the American jewelry industry. Newly released consumer spending trends and demographic data show that the factors which will drive the number of weddings – and the purchase of diamond engagement rings – will likely result in a “no-growth” bridal jewelry market – in terms of unit gains – for at least the next decade.

The graph below summarizes the forecast for the number of weddings in the U.S. market. Two decades ago, the number of marriages peaked at nearly 2.5 million annually, and has fallen slowly since then, as the graph illustrates. We now expect it to level off at about two million weddings annually. 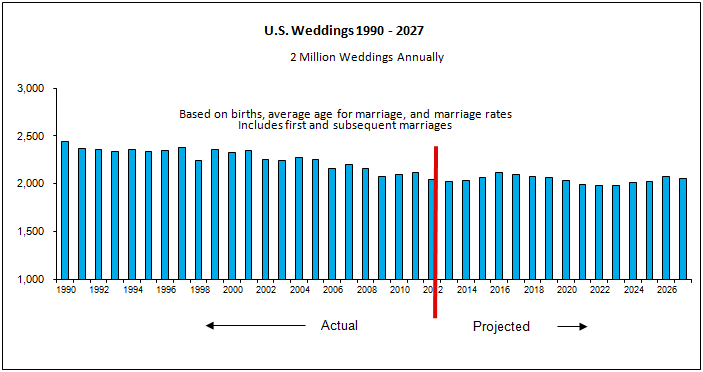 The bridal business has historically been a stable category for jewelers. Whether the U.S. was in a recession or a boom, jewelers could count on demand for bridal jewelry. Even in the so-called “Great Recession of 2007-2009,” the size of the average diamond engagement ring declined only slightly, while demand for bridal jewelry remained relatively stable. Bridal jewelry sales kept many jewelers from going out of business during the recessionary period of 2007-2009.

How important is the bridal jewelry business and the diamond engagement ring category for the typical specialty jeweler?

·         The average diamond engagement ring stone size is just under one carat. According to IDEX Online’s trading statistics, this is the most-traded size category of diamonds, with round diamonds of three-fourths to one carat representing about 15 percent of all diamond sales.

·         Tiffany & Company, the world-renowned jeweler, says that 29 percent of its worldwide sales come from engagement jewelry and wedding bands.  In the American market, nearly one-fourth – 23 percent – of its revenues are derived from that category. The average ticket for Tiffany’s engagement ring and wedding bands was $3,800 in 2012.

·         Sterling Jewelers, which operates Kay Jewelers, Jared, and several regional brands, says that roughly half of its sales are bridal related. Three-quarters of its revenues are derived from diamonds and diamond jewelry sales. Sterling, which is the operating subsidiary of Signet Jewelers, is the largest specialty jeweler in the American market.

·         Up to 25 percent of the typical AGS jeweler’s business is represented by bridal jewelry.

·         Bridal business, including diamond engagement rings, brides’ and grooms’ jewelry gifts, wedding bands, and other jewelry associated with the bridal market – $15-$18 billion (or 18 to 25 percent of total jewelry sales).

The following factors will have an impact on diamond engagement ring demand and bridal jewelry sales.

·         Much Slower Population Growth – The U.S. Census Bureau says that the American population will reach just 399.8 million in 2050, down dramatically from its prior forecast of 439 million people. Currently, there are about 315.5 million people in the U.S. As population growth slows and has a negative impact on wedding jewelry demand, it will also affect the universe of self-purchasing females who buy jewelry for themselves. IDEX Online Research had previously estimated that the number of females in the U.S. would rise by about 60 million between now and 2050, but our new forecast calls for an increase of only 40 million-45 million females.

·         Baby-Bust Underway – The Census Bureau’s slowing population growth rate may not be conservative enough. Their forecast calls for well over four million infants each year, including 4.2 million in 2012. The recent peak was 4.3 million births in 2007, a record level. However, provisional statistics from the National Center for Health Statistics show that the current annual birth rate is 3.9 million, and may be slowing. In the current baby bust, births have fallen nine percent from the 2007 peak. Further, the fertility rate has fallen to 63.0 births per 1,000 women age 15-44, a record low level.

·         Delayed Age For Marriage – The median age at which a woman marries for the first time reached a record high of 26.6 years of age in 2012, up dramatically from 20.3 years old in 1960. The rate of increase in the age of the first-time bride is greater than the rate of population increase.

·         Younger Women Not Marrying – Among women aged 15-to-44, just 36.4 percent of them were in their first marriage in the five-year period 2006-2010, down sharply from 44.1 percent in the early 1980s. As the marriage rate declines, jewelers have fewer opportunities to sell high-ticket diamond engagement rings as well as other bridal and wedding related jewelry.

The graph below summarizes the decline in the marriage rate for American females. Fewer women in the important age range of 15-to-44 are getting married.

·         Number of Adult Americans Who Are Married Is Declining – The percentage of adult Americans who are married continued to decline in 2012, according to new data from the U.S. Census Bureau. Just under 55 percent of all males aged 15 and older were categorized as married in 2012, a proportion of the American population that has declined for about 50 years. At the peak, in the early 1960s, more than two-thirds (69.3 percent) of all American men were married, with only one-third never-married, widowed, or divorced (not yet remarried). Today, there is almost a 50/50 split between men who are married versus men who are currently unmarried.

For women in the U.S. market, about half (51.7 percent) were married in 2012, while the other 48.3 percent were not married due to being divorced, widowed, or simply never married. At the peak, in the early 1960s, about two-thirds (65.9 percent) of all females in America were in a married relationship.

·         “Never Married” Women Rising – Along with the decline in the number of Americans who are married, the number of women who have never married continues to climb. Never-married women by age group in 2012:

·         Unmarried Couples Up 275 Percent in 15 Years – The number of unmarried partners in the U.S. has nearly tripled since 1996, according to new data from the Census Bureau. During that year, there were an estimated 2.8 million unmarried couples. By 2012, the number of unmarried couples in the American market had jumped to 7.8 million. For jewelers, that is a huge market that has foregone the purchase of the traditional diamond engagement ring and other wedding related jewelry.

·         Cohabitation Is Rising – The percentage of couples who are cohabitating without being married nearly quadrupled between the early 1980s and today. Research from the National Center for Health Statistics (NCHS) shows that more than 11 percent of all couples are in a relationship without marriage, as the graph below illustrates. Further, new research from NCHS shows that nearly one-half of all women aged 15-44 had cohabitated before marriage.

·         Diamond Engagement Ring “Attachment Rate” Slowing – At one time, an estimated three-fourths of all American brides received a traditional diamond solitaire engagement ring. It appears that fewer brides-to-be are receiving diamond solitaire rings. Often, they receive a piece of family jewelry, a piece of estate jewelry (sometimes re-crafted), or a fashion ring.

·         Fewer Second and Subsequent Marriages – The rate of second or more marriages also dropped sharply, especially in recent years. In 1995, just over 9 percent of all women were in their second marriage or more; today only about 5 percent have married more than once. The size – and value – of the diamond engagement ring typically increases for each subsequent marriage.

The graph below summarizes the number of American women between the ages of 15 and 44 who are in their second or higher marriage.

·         Divorce Rate Falling – As the American divorce rate falls, the number of second and subsequent marriages will also fall. As a result, there will be less bridal jewelry sold. Furthermore, engagement ring diamonds are typically larger for second and subsequent marriages, thus, demand for bigger diamonds is expected to wane as the number of divorces decline and remarriages fall. The graph below summarizes the divorce rate in the U.S. from 2001 through 2011.

·         Fashion Rings Replacing Some Diamond Engagement Rings – Many of today’s new brides are receiving a fashion ring to symbolize their engagement. The American millennial consumer – the heart of the population segment for first-time marriages – has a different set of expectations and desires compared with other demographic groups. Essentially, young brides want something different. A diamond solitaire is, to them, the same-old, same-old thing. Worse, it is what their mother received, and millennials want to differentiate themselves from their parents.

The Opportunity for Jewelers

While we expect bridal demand to remain steady, it is likely to be a no growth category – in terms of unit growth – for jewelers in the American market. If demand for diamond engagement rings is likely to be flat, at best, what can the typical specialty jeweler do to create more business? Here are a few suggestions:

·         Raise the average ticket for a diamond engagement ring. Older couples who are getting married have more money, so they can afford a more expensive engagement ring.

·         Stay in touch with newly married couples in an effort to sell jewelry to them for milestone events such as birthdays, anniversaries, birth of children and other lifecycle events.