IDEX Online Research: US Demand for Jewelry Grows 12.2% in April

(IDEX Online) – For a second month in a row, jewelry and watch sales in the U.S. increased, rising 12.6 percent in April. Specialty jewelers once again gained market share, their sales growing 17.7 percent year-over-year in April.

The full analysis and statistics on jewelry industry inflation for May 2013 is available to IDEX Online Research subscribers and IDEX Online members here.

Jewelry sales grew a robust 12.2 percent in April, according to the U.S. Department of Commerce.

Last month we stated that the robust results reflect the continued improvement in the U.S. economy – both real but mostly perceived. Today we can say that the U.S. economy is improving. Total retail sales ex-autos increased a robust 2.7 percent in April, increasing from 1.8 percent in March, according to the U.S. Department of Commerce. 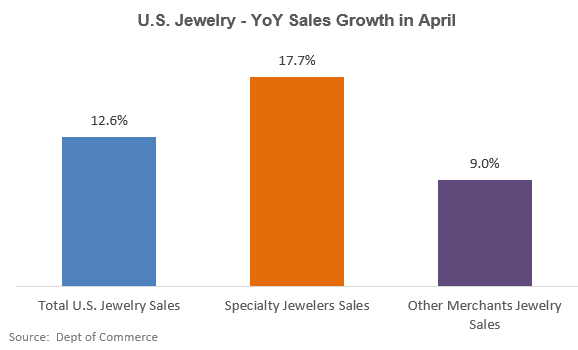 Since November 2012, total jewelry sales have been growing by more than 8 percent monthly, except when they dipped in February to 7.5 percent, according to the revised figures.

In the seven months between October 2012 and April 2013, growth in watch sales in the U.S. outpaced growth in jewelry sales, according to data from the U.S. Department of Commerce.

American consumers are voting with their wallets – and showing a growing interest in jewelry in 2013. The good results of the jewelry trade fairs held in Las Vegas earlier this month indicate that retailers are restocking and expecting the positive trend to continue.

This is a promising trend and one we cautiously expect to continue during the summer months and beyond.

The full analysis and statistics on jewelry industry inflation for May 2013 is available to IDEX Online Research subscribers and IDEX Online members here. Click here for more information on how to subscribe or become a member.