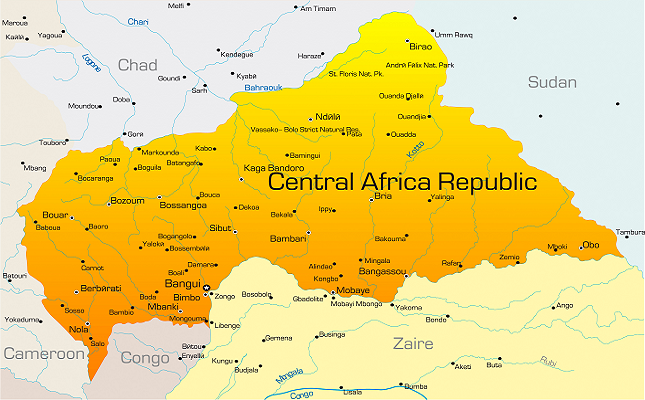 (IDEX Online News) – According to a report released by The Enough Project, a Washington, DC-based organization that works to end genocide and crimes against humanity, the total current value of the illicit diamond trade and taxation by armed groups in the Central Africa Republic (CAR) is estimated to be between $3.87 and $5.8 million dollars annually.

Warlord Business reveals that although CAR has been suspended from the Kimberley Process (KP) since May 2013, the two main rebel groups in the country – the ex-Séléka and the Anti-Balaka, are still using diamonds to fund their activities.

According to researcher Kasper Agger, the groups mine and steal diamonds and gold that they sell to middlemen. They also profit indirectly by looting, extortion and predatory taxation of miners and traders.

Countries – mainly Cameroon, the Democratic Republic of the Congo and Sudan –and are then sold on to international markets; a smaller amount is sold on the local market within CAR.

According to the report, some of the diamonds sold locally are purchased by three Central African diamond buying houses that currently hold diamonds worth close to $8 million. However, since the diamonds are not being exported, this activity does not violate the terms of the KP suspension.

Although the organization mentions that there is currently some discussion about the possibility of a partial lifting of the KP restrictions, there are concerns that the combination of an inadequate diamond tracing system in CAR and control by armed groups of diamond mines could result in conflict diamonds, which have provided financing for armed groups, entering the KP-approved diamond trade.

The organization recommends that to counter this danger, any lifting of CAR’s KP diamond restrictions should be conditioned on the removal of all armed groups from mining sites, full control of diamond trading markets by U.N. peacekeepers or local gendarmes, and a credible tracing and due diligence system for diamonds bought and sold by Central African diamond companies, including those for export.

Among its recommendations for future action, the report suggests establishing government control of gold and diamond mining sites. This, it states, would play an important role in countering parallel taxation and help to protect civilians from crimes such as forced labor and rape in mining areas and the stealing and trafficking of diamonds and gold that provide profit for armed groups.

Before lifting the KP suspension, the Enough Project calls for three conditions to be met: the US Geological Survey or similar agency should help establish baseline production statistics for the conflict-free diamond mines; the KP should establish a multi-stakeholder team to be based in CAR and monitor whether conflict diamonds are entering the conflict-free supply chain and diamond companies buying from CAR or neighboring countries should commit to conducting strict due diligence on their purchases.

WDC Reiterates Warning Not To Trade in Diamonds From CAR