American shoppers have stepped up their spending on jewelry over the past 10 years, but specialty jewelers have lost both market share and consumers’ share of wallet. Instead, shoppers are spending their jewelry dollars at multi-line merchants like Wal-Mart, J.C. Penney, Costco and others, according to new data from the Bureau of Labor Statistics (BLS).

Specialty jewelers – those chains and independent merchants whose primary business is selling fine jewelry and watches – are a diminishing segment of the overall US jewelry retail industry. According to the BLS data, their contribution to the American economy has waned over the past decade as they have fallen out of favor with American shoppers. In contrast, the economic contribution and market share from jewelry sales at multi-line retailers has continued to increase over the 10-year period 2004-2014.

Here are the key findings from the new BLS data for the US jewelry industry: 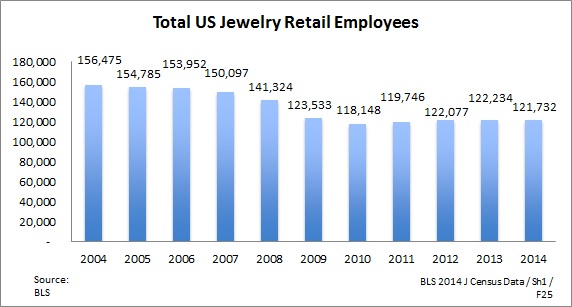 ·         Total specialty jewelry doors have fallen by 19 percent annually over the past decade. In 2004, the BLS says there were 26,642 jewelry stores; in 2014, there were only 21,599 stores. This data is less onerous than data from the Jewelers Board of Trade (JBT), which shows that there were 28,772 specialty jewelers in 2004, a number that declined to 21,463 in 2014, a decline of about 25 percent. The JBT census measures “active” retail jewelers, so there is always a small, mostly non-material difference between JBT data and BLS data. The graph below summarizes the decline in the number of specialty jewelry stores serving the growing US Thus, fewer specialty jewelry merchants are serving a greater number of households – about 126 million households in 2014 versus about 116 million in 2004, an increase of almost 9 percent or 10 million households. 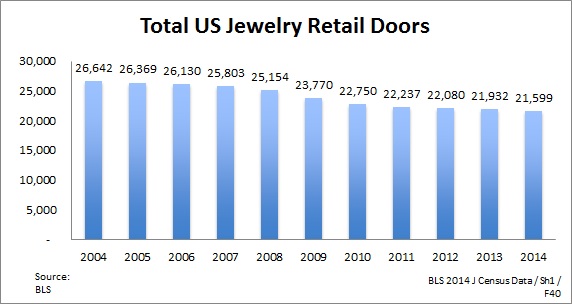 ·         Total wages paid by specialty jewelers are barely up over a 10-year period. In 2004, the US specialty jewelry industry contributed employee wages of $4.3 billion annually; in 2014, the annual economic wage contribution to the US economy had risen to only $4.4 billion. This is no surprise; despite a decline in the number of employees, the industry has been forced to respond to a highly competitive environment for employees. Further, the average weekly wage is up nearly 3 percent, and the total annual wage is up about 3 percent. This is a marked improvement over retail wages for all US retail employees which have risen by a paltry 1.6 percent over the past 10 years.

However, the average specialty jewelry employee makes just over $17 per hour or about $697 per week, which equates to about $36,000 per year. There are some jurisdictions – and at least one presidential hopeful – that want to raise the US minimum wage to $15 per hour. A “living wage” is in the mid-$30,000 range, according to several studies.

The graphs below illustrate wage trends in the US jewelry industry over the past 10 years. 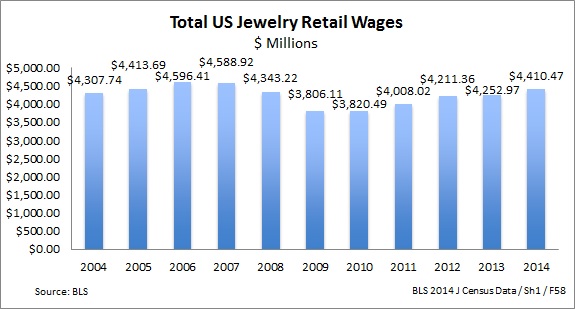 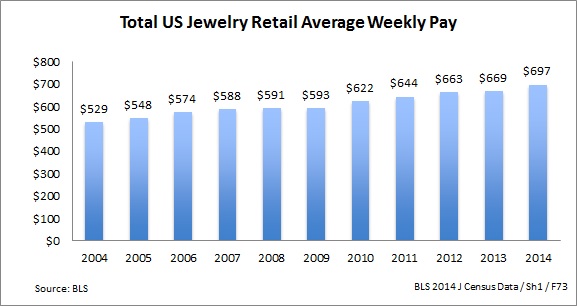 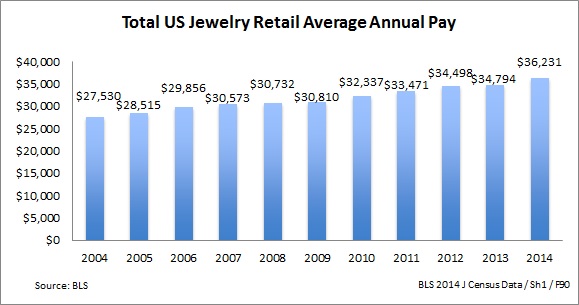 ·         Specialty jewelers in the US market are losing market share to multi-line merchants who sell jewelry. Over the past 10 years, total sales of fine jewelry and fine watches have increased to $78.1 billion from $56.6 billion, a 38-percent increase in the size of the market. Specialty jewelers’ sales have growth from $27.6 billion in 2004 to $30.5 billion in 2014, an increase of just over 10 percent. In 2004, specialty jewelers held a market share of about 49 percent; it dropped to 39 percent at the end of 2014, as the graph below illustrates. 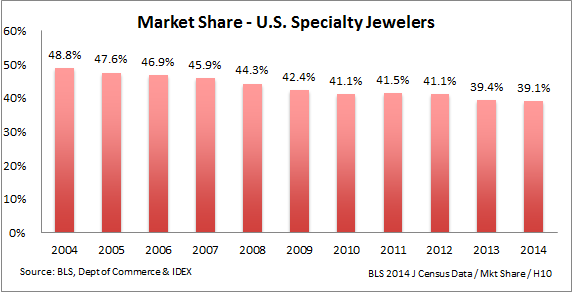 Unless specialty jewelers can develop a convincing marketing strategy, we believe that they will continue to lose market share. Most other retail categories have consolidated to just a few “big” merchants. Specialty jewelry remains one of the last unconsolidated retail segments, but it is accelerating toward consolidation.

Despite these new statistics, which show that the specialty jewelry industry is losing stores, market share, and share of wallet, there is good news relating to store operating efficiencies. As jewelry demand continues to grow, there are fewer merchants vying for an expanding market. With diminished competition, the remaining jewelers should be able to generate greater sales and profit growth. 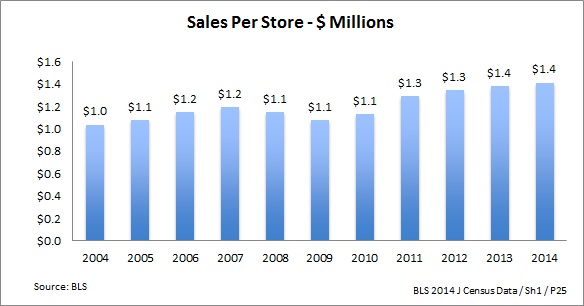 ·         Sales per employee are up sharply. Total specialty jewelry sales per employee – which includes all employees such as sales people, administrative support people and top officers – have grown by 42 percent in the 10-year period ended 2014. That is a dramatic increase in sales efficiency. The graph below illustrates sales per employee from 2004 through 2014. 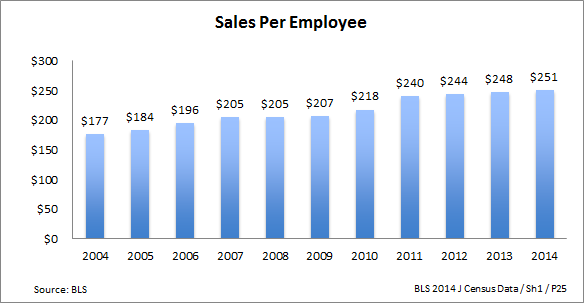 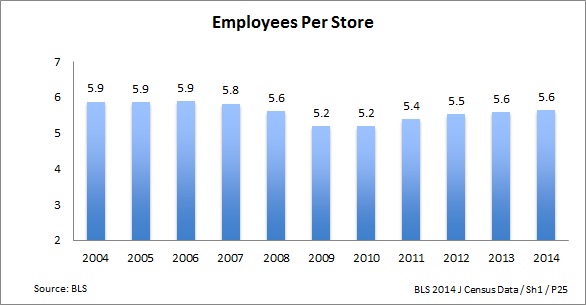 While there are many conclusions that can be drawn from the BLS data, we have highlighted five key points:

·         The specialty jewelry industry has become a less important retailing segment in the American economy.

·         While the American specialty jewelry industry has shown modest growth over the past decade, its growth rate is far below the growth of total retail sales in the US market.

·         Unless specialty jewelers can develop a credible competitive differential, they will continue to lose market share to multi-line retailers.

·         Specialty jewelry merchants who expect to sell high-ticket luxury goods to discerning shoppers will need to pay more to get qualified personnel.

The following table summarizes the latest government statistics for both the US jewelry industry as well as the total US retailing industry.