IDEX Online Research: Same-Gender Unions A Positive for US Jewelry Industry, But Not A ‘Big Deal’

The US jewelry industry has been jubilant since the Supreme Court of the United States (SCOTUS) legalized same-gender unions recently. After all, many jewelry insiders concluded, this will be a big boost for sales of jewelry – particularly wedding related merchandise – in America.

There’s no question that this will be positive for America’s jewelry industry. But how much of a positive will it be? The SCOTUS decision is being called a “big deal” by jewelers, but the numbers don’t support it.

IDEX Online Research has completed exhaustive examination of the same-gender wedding market and its potential for the US jewelry industry. At most, it could boost industry sales by perhaps 1 percent – just under $1 billion – between now and year-end 2016 as same-gender households legalize their living arrangement. After that, jewelry for same-gender unions will have only a minimal impact on industry sales, based on our analysis.

IDEX Online Research utilizes only solid, empirical data and estimates that are credible and defensible. Speculation has no place in our research. Here’s how we conducted our research into the market potential for wedding jewelry aimed at same-gender unions:

·         Reviewed Census Counts – The US Census Bureau is the main source for reliable numbers on same-gender households. We also reviewed other resources; most reported results similar to the Census Bureau. Notably, a few sources suggested that the government numbers might be low, but offered no credible proof.

·         Interviewed Retail Jewelers – We asked jewelry retailers a series of questions including 1) how much same-gender jewelry are they selling? 2) What is the average retail price point and average ticket for same-gender wedding jewelry? 3) What items are same-gender couples buying – both male and female. We also asked about same-gender customer traffic since the SCOTUS decision.

·         Reviewed Advertising for Same-Gender Jewelry – We looked at jewelers’ advertising and promotions aimed at the market for same-gender wedding jewelry, including online merchants.

It is important to note that IDEX Online Research “does not have a dog in this fight.” We do not engage in any commercial activity in the jewelry distribution chain, and we do not own any equities or have an investment in any publicly held jewelers or their suppliers.

The Numbers – A Modest Market Size

We’ve seen an incredibly wide range of sales estimates regarding the market size for same-gender wedding jewelry; most of it has been an exaggeration about the market potential. As it turns out, no one seems willing to explain their methodology for calculating the size of the market; mostly they are publishing speculative data based on wishful thinking, in our opinion. IDEX Online Research has the only “hard data” backed by empirical evidence.

We’ve been generous with our estimates. For example, we assumed that every same-gender household enumerated by the Census Bureau will form a legal union and buy jewelry over the next 18 months. That’s unlikely. We assumed an average ticket for same-gender wedding jewelry that is well above any level reported by our sample of jewelers. That, too, is unlikely. In reality, the number of same-gender weddings will likely be much lower than our estimate, and the average ticket is likely to remain lower than our estimate for the near future.

Here’s our analysis of the market potential for same-gender jewelry, based on numbers from the Census Bureau, the Department of Commerce, and IDEX Online Research. 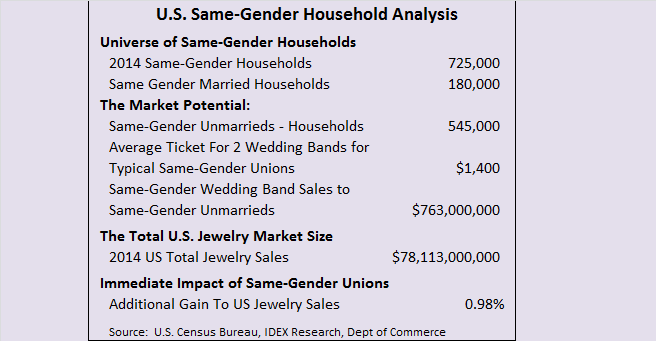 Americans in a same-gender household have different buying habits for wedding jewelry, when compared to the typical heterosexual US couple.

Our research has determined that couples in a same-gender household do not buy diamond engagement rings. They may purchase “promise” rings – simple rings, sometimes set with precious or semi-precious stones, with an average retail ticket well under $500 – typically closer to about $200-$300 each. These “promise” rings serve essentially the same purpose as traditional engagement jewelry for heterosexual couples.

For their wedding rings, our research shows that same-gender couples only buy wedding bands. Those bands are typically very simple and plain, though they may have a design engraved in them, and in a few cases, they may be set with melee diamonds. Mostly, same-gender couples prefer simple wedding jewelry, as illustrated by this ad from a Google search: 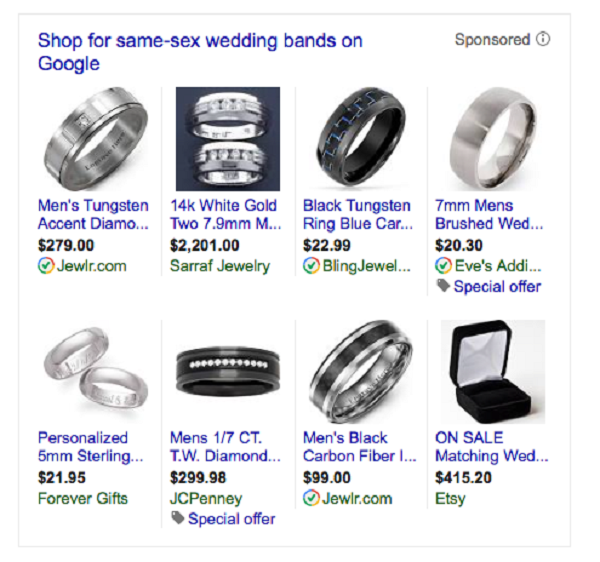 Online retailer Mytriorings has wedding bands clearly aimed at the upper end same-gender market. The most expensive set of wedding bands is about $1,700, while most are $1,000 or less, as the ad below illustrates. The prices shown are for the set of two rings. 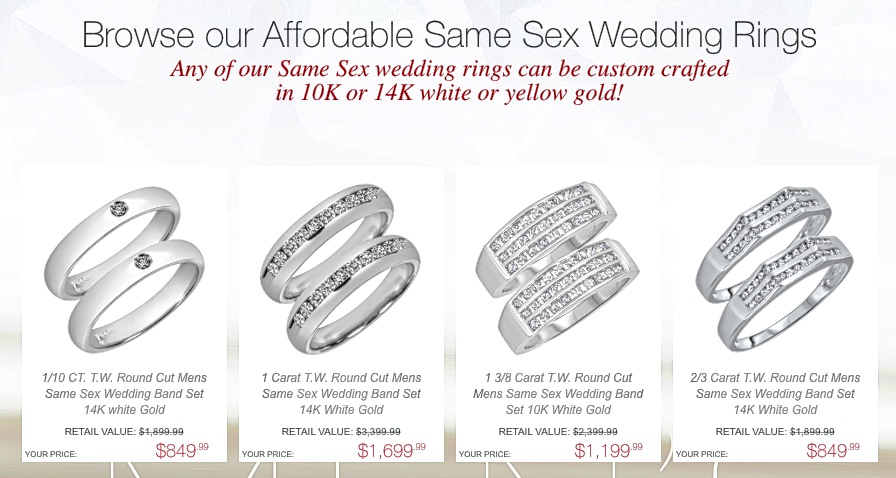 When we searched for same-sex wedding bands and jewelry at the major chains – Kay Jewelers, Zale’s, Tiffany & Co. and others – we received a message that our search “Returned No Results.”

Again, assuming that the average ticket for same-gender wedding jewelry is $1,400, and assuming that all 30,000 newly formed same-gender households decide to form a legal union each year, we can assume that this would add $45 million to $50 million in annual jewelry sales, or six one-hundredths of a percent to annual jewelry sales in the US market. In short, it won’t be a large enough market to track accurately.

As for the diamond industry, the analysis indicates that it will barely have a ripple effect. Calculating the diamond content of the few diamond wedding bands is a simple matter. Our analysis suggests that it could add a few million in annual sales to an industry that is an estimated $23 billion in annual sales, according to Tacy. This would be less than one-tenth of 1 percent of total polished diamonds at the supplier level. In short, it will be positive, but most diamantaires won’t see any sales gain.

As it turns out, traditional jewelers probably won’t notice any increase in sales. Even though specialty jewelers have just 39 percent of the market share of the total US fine jewelry market, we assumed that they would capture about half of the market (50 percent) for same-gender wedding bands. Since there are about 21,500 specialty jewelers in the US, each would gain same-gender wedding jewelry sales of about $17,750 in the first year or 18 months, assuming that they all benefit equally. Based on two different scenarios, specialty jewelers could see their sales rise by 1.0 to 1.3 percent near term, as the table below illustrates. Longer term, the impact would be much less. 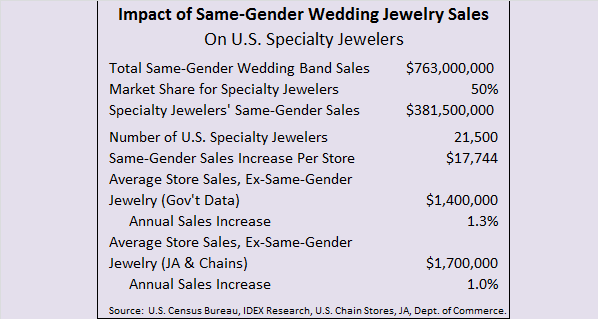 In reality, we believe that a few progressive jewelers will target the same-gender wedding market, and they will be the beneficiaries of significantly increased sales. In contrast, jewelers who continue to target the “traditional” wedding jewelry market will probably see little or no increase in their sales.

The Opportunity – Jewelers Could Develop the Market

There’s no good reason why the average ticket for same-gender wedding jewelry should be limited to $1,400 or less. Enterprising jewelers may be able to upsell those couples to more expensive jewelry.

There appears to be one other notable hurdle that merchants will need to overcome. In our observations of same-gender households, simplicity seems to be a common theme in most of them. They tend to live more simply: smaller homes, less “stuff” in those homes, utilitarian automobiles and simple, healthy dietary habits. The concept of “simplicity” seems to extend to jewelry. We saw no ostentatious jewelry among our sample of same-gender households.

As a result of the “simple” needs of most same-gender households, jewelers will need to work extra hard to convince most of those couples that they need flashy, expensive jewelry.

Challenging the Critics of This Research

Estimates of the size of the LGBT market vary widely, and there has been some controversy over the Census Bureau data. We’ve seen numbers that suggest that the American LGBT population could be as much as 10 percent of the total US population. None of those sources has offered any proof that the data was collected in a scientific manner and properly analyzed. In the absence of better credible data, we will continue to use Census Bureau numbers.

Because of the controversy over the numbers, we subjected our research to peer review. We received comments, and stand confident of our conclusions. Like all researchers, our data collection continues to evolve, and when we uncover new credible data, we may revise our conclusions and forecasts. We have an open mind.