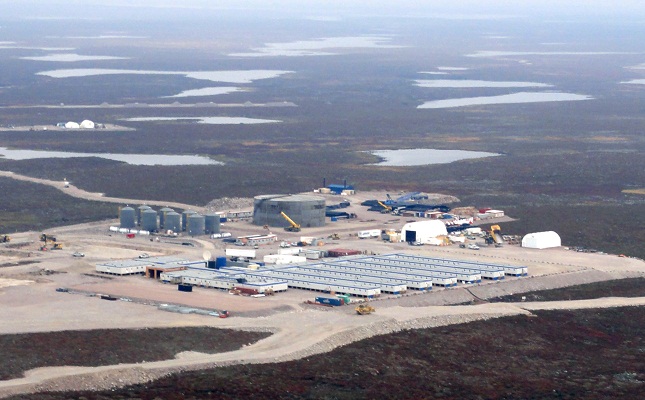 (IDEX Online) – Mountain Province Diamonds Inc. reported that production for the third quarter ended September 30 from the Gahcho Kué Diamond Mine was 198,000 carats of which its part, as a 49 percent shareholder, is approximately 97,000 carats.

Among the diamonds recovered last month were a 50.25-carat gem quality diamond and three fancy yellow diamonds weighing between 3 and 5 carats.

Ramp-up production at Gahcho Kué commenced on August 1. From August 1 to September 30, the plant processed approximately 130,000 tonnes of ore and produced 198,000 carats. Mountain Province owns the project along with De Beers Canada which has a 51-percent stake.

Patrick Evans, President and CEO, commented: “We are very pleased that ramp-up production commenced six weeks ahead of schedule. Mining and processing continues to progress well and Gahcho Kué remains on track to achieve commercial production in early 2017.”

The first sale of the company’s 49 percent share of the run-of-mine production will take place at an open tender in Antwerp during January 2017 and approximately every five weeks thereafter.

Included in the parcel of fancy and special diamonds from the September production are a 50.25-carat gem quality diamond and three fancy yellow diamonds weighing between 3 and 5 carats. The fancies and specials now owned by Mountain Province will be included in the company’s January 2017 sale.

Mr. Evans added: “The 50 carat diamond recovered in September is the largest diamond recovered to date and provides further confirmation that the Gahcho Kué has a population of large, high quality gem diamonds. It is also exciting to see a population of good size fancy yellow diamonds, which offers encouragement that we’ll see further fancy diamonds as the production ramps up.”

Canada's Newest Diamond Mine to Give Economy C$6.7 Bn Boost