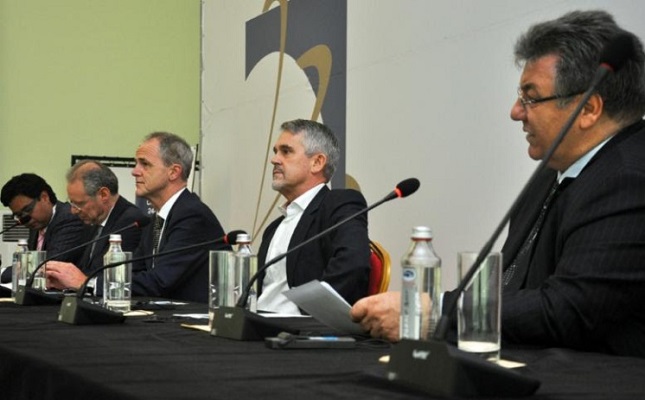 (IDEX Online) – CIBJO, the World Jewellery Confederation, wrapped up its 2016 congress in Yerevan, Armenia, after five intensive days of discussions on a wide-ranging set of issues facing the gemstone and jewelry industry.

The sessions of its specialized commissions covered the diamond, colored stone, pearl, coral, precious metals and gemological laboratory sectors, as well as ethics, marketing and education.

The CIBJO Congress, which was the first held by the confederation in the fast-growing Central Asian market, included the three days of formal congress sessions, as well as two pre-congress days of sector and commission steering committee meetings. It was attended by about 120 delegates from all over the world, among them sizable delegations from CIS states, including Armenia, the Russian Federation, Kazakhstan and Kyrgyzstan. The event was hosted by the Armenian Jewellers Association (AJA).

Serving as the venue for the meeting of the CIBJO Assembly of Delegates, the annual congresses are the official forum for confederation members, which currently total 87 national jewelry and gemstone associations from 43 countries, and representatives of 55 of the industry's most important commercial bodies.

The 2016 CIBJO Congress was officially opened in the presence of the President of the Republic of Armenia, Serzh Sargsyan, who stressed the connection of the Armenian nation to the jewelry business and craft. "Throughout the centuries, Armenian jewelers around the world have had a great input into the development of the global jewelry industry," he stated. "Today, our republic considers jewelry making and diamond polishing to be among its priority industries. It is for that reason that we do our best to assist and promote these industries however we can."

During the Opening Session, President Sargsyan awarded CIBJO President Gaetano Cavalieri with a special medal of gratitude in honor of his and CIBJO's contribution to the jewelry industry in Armenia and worldwide. Cavalieri accepted the award, emphasizing that he was doing so on behalf of CIBJO, its members, and the work done by the confederation on behalf of jewelry and gemstone sector participants, consumers and stakeholders.

In his opening address, Cavalieri stressed the independence of CIBJO, and its commitment to serve the interests of all players in the greater gemstone and jewelry industries, regardless of size. "CIBJO is the only organization operating in the industry that considers its area of interest and responsibility to include the entire chain of distribution, from the mine to the consumer outlet, in every country and region where jewelry and gemstones are produced, manufactured and sold," he said. "There are no size restrictions in terms of the individuals or organizations we serve, meaning that our commitment to the wellbeing of the smaller player is as solid and absolute, as is our commitment to the larger players in the business."

"We firmly believe that if you tender and nurture the grass roots of the industry, the business will be inherently healthier. The only entry card into our industry should be a firm commitment to do business fairly and responsibly, always looking out for the interests of your employees, your stakeholders and your customers," Cavalieri stated.

Other key events at the Congress included:

CIBJO Puts Agendas and Related Documents Online Ahead of 2016 Congress