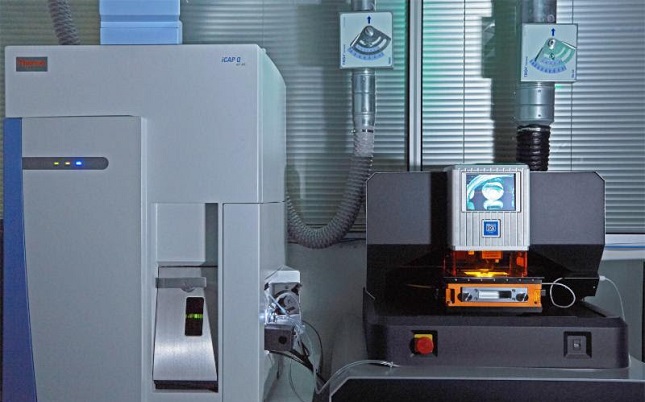 (IDEX Online) – The Swiss Gemmological Institute SSEF has become the first gem laboratory worldwide to introduce into its facility the ground-breaking GemTOF instrument.

The machine conducts chemical analysis through laser ablation, thereby providing more information about the origin of a variety of gems, as well precisely identifying a range of other elements in colored gemstones, diamonds and pearls.

As with other laser-ablation based systems, it extracts chemical information from a few tiny laser-ablated pits, usually restricted to the girdles of gemstones. However, unlike the other laser-ablation systems currently being used by gem labs, GemTOF's Time of Flight technology allows almost all isotopes to be measured simultaneously, rather than analyzing a selection of them one after the other. It also creates very shallow pits with the diameter of a single human hair, which are hardly visible and do not affect the weight of a stone, the lab said in a statement.

The GemTOF's breakthrough technique offers new possibilities for origin determination of colored gemstones, among them emerald, ruby, sapphire, spinel, alexandrite, tourmaline and garnet. Other applications include age dating, analysis of inclusions and chemical zoning in colored gemstones, diamonds and pearls.

"Being the first gemological laboratory worldwide to introduce this new and highly sensitive instrument to gemstone testing marks a further milestone in SSEF's mission to offer our clients services based on the most sophisticated scientific techniques available," said Dr. Michael Krzemnicki, Director of SSEF.

Detailed information about the use of GemTOF technology in gemmology has been published in the most recent issues of the Journal of Gemmology and InColor.