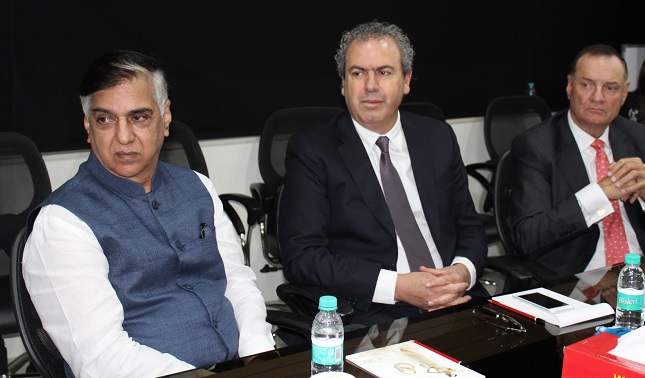 The following press statement was released by the World Federation of Diamond Bourses:

(IDEX Online) – WFDB President Ernie Blom told the 2017 Presidents Meeting on Tuesday that the organization will work in close cooperation with the Diamond Producers Association (DPA) in order to help boost its generic diamond marketing efforts. Mentioning reports that the DPA was looking to boost its annual budget from the current $6 million, he told the international gathering taking place in Mumbai this week that the increase in the DPA's budget will allow it to invest in more sophisticated and long-term programs.

"Advertising today is a different world to the one most of us here grew up with," he commented. "No longer is it simply a case of producing a TV, radio, newspaper or magazine advertisement. Markets are incredibly fragmented, with people getting their information from a wide range of sources, especially the Millennials. That means researching the market and allocating resources in a way that enables you to reach your target audience in the most efficient way possible. The WFDB-supported World Diamond Mark (WDM) initiative will work with the DPA because we recognize that generic marketing is critical for our business. We wish the DPA great success in its efforts and pledge to work together for the good of the entire industry."

Blom laid out the challenges facing the global diamond business, but urged colleagues to remain positive in order to deal with them. "Although the issues of financing, mixing of undisclosed synthetic stones and others are difficult, we must be determined in dealing with them." There are many bright spots from which the trade can draw great confidence, he said, including the tax agreements in Belgium and Israel last year and the Gem and Jewellery Export Promotion Council's (GJEPC) generic diamond promotion campaigns in India with De Beers. In addition, the GJEPC has become a full WFDB member and the Federation is working on bringing in more members, Blom told the meeting. Furthermore, the WFDB is celebrating its 70th anniversary this year, with events to be held to celebrate it, as well as a special commemorative book planned for publication later this year.

Welcoming the WFDB Presidents to India, Bharat Diamond Bourse President Anoop Mehta spoke about synthetic diamonds and the widespread efforts the Indian diamond trade has taken in providing detection equipment and seminars on the issue for traders. GJEPC Chairman Praveenshankar Pandya talked about the challenges facing the diamond industry. "Unless the midstream is strong the rest of the industry cannot be strong," he commented. Meanwhile, Ashish Mehta, the convenor of the Natural Diamond Monitoring Committee established by the Indian trade to monitor the scope of synthetic diamond trading, especially undisclosed mixing, spoke about the work of the GJEPC in this regard across India.

DPA CEO Jean-Marc Lieberherr addressed the meeting, providing an update on the work of the body. The DPA will increase investment in the United States, and plans to enter the Indian market in September 2017 and China in January 2018. He revealed a DPA initiative to combat undisclosed synthetic diamonds by establishing an independent diamond screening equipment testing lab to test the range of detection machines available. "The project will be led by the DPA, but will involve key industry organizations, including the WFDB and GJEPC, and main equipment manufacturers so that the solution delivered meets the needs of the industry and satisfies the manufacturers' expectations of independence and objectivity," Lieberherr explained.

The meeting also heard a report from World Diamond Council President Andrey Polyakov on the work of the organisation.

Ending the meeting, the WFDB Presidents agreed a proposal to engage with the International Grown Diamond Association, with Ernie Blom saying he will seek to create a dialogue with the organisation.

WFDB Vice President Yoram Dvash told the gathering that the 2018 World Diamond Congress will be hosted by the Israeli diamond trade in Tel Aviv in May or June next year.