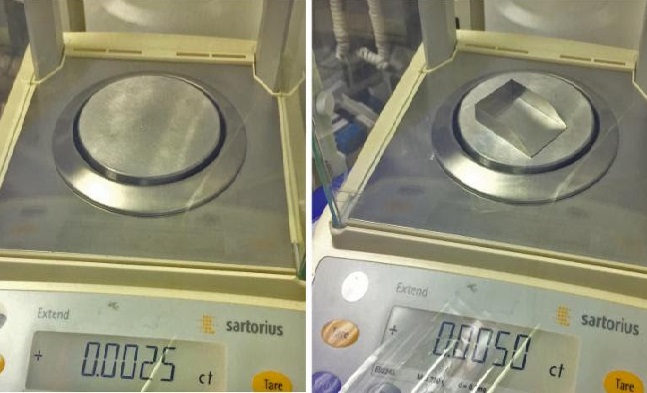 (IDEX Online) – Multiple single-cut diamonds, sized from a quarter point to half a point (0.0025-0.005 carats), set in jewelry and recently submitted for testing to a Diamond Services laboratory have been found to be synthetic, greatly expanding the range of goods that can be considered at risk of improper and deceptive disclosure.

The jewelry was originally submitted to Diamond Services' laboratory in New York, and several stones were detected as being potentially laboratory grown. Due to their size, the owner agreed that 11 of them set in eight rings, ranging in size from 0.0025 carats to 0.005 carats, could be removed and sent for full analysis at Diamond Services' facility in Hong Kong.

There, they were examined once again with Diamond Services' DiamaTest system, which ratified that the diamonds were synthetic, and these findings were confirmed by examination with the DiamondView system of De Beers' International Institute of Diamond Grading & Research (IIDGR) and Diamond Services Mini Raman Spectrometer.

Usually restricted to smaller-sized stones, single-cut diamonds typically have 17 or 18 facets, and some as few as 16, compared to the standard brilliant round cuts, which are made up of 57 or 58 facets. Most round stones are first polished as single cuts, and then the additional facets are added. But with small stones, they are left as single cuts.

"To the best of my knowledge, this is the first time that a synthetic single-cut stone has been detected mounted in jewelry, and it is a credit to our Diamond Services procedures and set of equipment," said Jospeh Kuzi, Diamond Services founder and managing director. "What this means is that almost no diamond can be taken at face value."

The source of the single-cut synthetics is not immediately apparent, but Kuzi noted that the growing availability of CVD man-made diamonds may prove to be a factor. "CVD is being grown widely in areas outside the diamond industry, and now includes diamond wafers being grown in laboratories for use in the electronics industry. It could be that waste from these labs and factories end up being processed as very small single-cut diamonds for jewelry," he said.

Diamonds submitted for synthetic screening at Diamond Services facilities are tested using several systems, including the DiamaTest and Mini Raman Spectrometer, both of which were developed by the company. The latter is the only system currently available that can definitely test rough and polished diamonds, both mounted and un-mounted, without the need to refer them for further testing, accurately detecting whether they are HPHT or CVD lab-grown synthetics within seconds, the lab said in a statement.

Diamond Services, which was established in 2012 in Hong Kong, specializes in development of synthetic diamond detection devices.