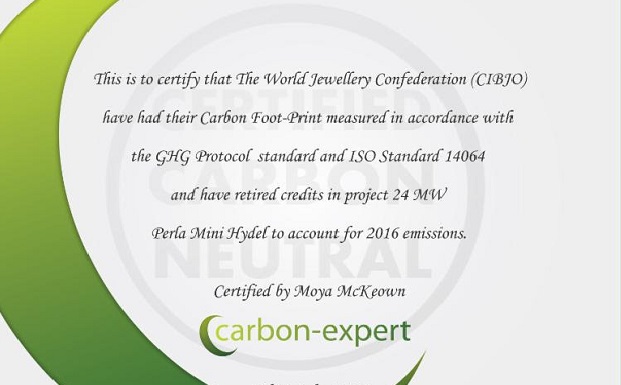 (IDEX Online) – For the fourth consecutive year, CIBJO, the World Jewellery Confederation, has been certified as carbon neutral, after offsetting its greenhouse gas emissions for 2016.

It did so as part of its own Greenhouse Gas Measurement Initiative, which it launched in 2014 to promote environmental consciousness and responsibility in the greater jewelry industry.

To become carbon neutral, CIBJO's carbon footprint first was measured by Carbon Expert, an environmental consulting organization that works with the jewelry confederation in the Greenhouse Gas Measurement Initiative. It encompassed all greenhouse gases emitted by CIBJO as a result of regular operations during the course of the year, including the annual congress in Armenia last October. This was offset through the purchase and retirement of 167 Registry Voluntary Carbon Units (VCUs), which were invested in a mini-hydroelectric power plant in Karanataka, India, which is a recognized carbon offsetting project.

Greenhouse gases, which radiate and trap heat in the earth's atmosphere, are considered a primary case of climate change by the overwhelming majority of experts in the scientific community. They include carbon dioxide, whose entry into the atmosphere is accelerated through the use of fossil fuels; methane, which is emitted during the production of coal, natural gas, and oil, as well as through emissions from livestock and other agricultural practices, and through the decay of organic waste in municipal solid waste landfills; nitrous oxide, which is emitted during agricultural and industrial activities, as well as during combustion of fossil fuels and solid waste; and fluorinated gases, which are sometimes used as substitutes for stratospheric ozone-depleting substances.

The CIBJO Greenhouse Gas Measurement Initiative was established by the jewelry confederation's Marketing & Education Commission to help companies within the jewelry and gemstone industries understand their environmental impact, reduce it, and protect themselves and the industry as a whole. Companies that become part of the program are invited to work with Carbon Expert, which assists them in complying with ISO Standard 14064, specifying how to quantify and report greenhouse gas (GHG) emissions and removals, and apply ISO Standard 20121, which offers guidance and best practice for controlling the environmental impact of events.

"We are extremely proud to have been certified as carbon neutral once again, and hope that this will serve as a model for others in the industry," said CIBJO President Gaetano Cavalieri. "Global warming leading to climate change is a phenomenon that threatens every single living being, and it only can be challenged if we work both individually and in unison. Proper environmental stewardship is an integral component of corporate responsibility, and it should come to be considered a hallmark of how we go about our business in the jewelry and gemstone sector."