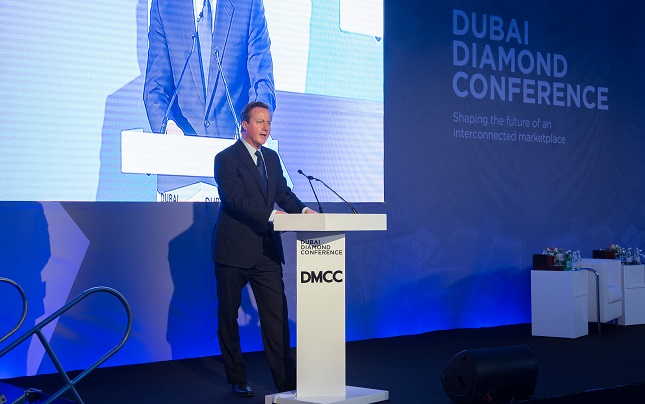 (IDEX Online) – David Cameron, the former Prime Minister of the United Kingdom, opened the second day of the Dubai Diamond Conference with a strong message to a room of international leaders of the diamond industry ranging from African Ministers to traders, financiers and world-renowned jewelers with a strong message on globalization and sustainability.

Cameron praised the UAE for its pro-business environment, saying: “It is impossible to visit this country without being wowed, it is a towering example, quite literally, if you look outside, of what can be achieved.

"Lots of people questioned whether all of this investment in the desert would ever work, but your airports are international hubs, your tourist industry is a model for others to follow, you’re a business location of huge standing, there are over 100,000 of my fellow countrymen living here today, and I know that they don’t just come for the big attractions - the tallest building in the world, the biggest shopping mall in the world, the top seven star hotel in the world - they come here for the opportunities. They hope that in this global success story, they can write their own success stories.”

Speaking of the strong international relations between the UAE and the UK, Cameron said: “We believe in openness and international trade, we believe in cooperation and dialogue, we work through multilateral organizations. But all of these things are under threat today from the rise of populism, and the so-called strongman leaders around the world.

"Their proponents say that the free enterprise system, trading with the world, engaging with the world, rejecting the extremes, celebrating diversity, and practicing rational, reasonable, moderate politics, that all these things should be abandoned. I don’t agree. I am a big supporter of globalization. I believe that there is strength in our diversity, and there is no way I think that we should go down the populist route of tearing up the things - the open economies, and the open societies - that we hold dear. But equally, I do not think that we should ignore the concerns that have fuelled that rise. Because we should remember this, this sentiment of anti-globalization, it does come from people. From real people’s hopes and fears, from their economic concerns, and from their cultural concerns. The pace of change being too fast.

"We should respond to this cultural and political dislocation, not by throwing the baby out with the bathwater, but by course-correcting, and… I believe [this] is the right opportunity to do so.”

In discussing what business can do to correct the course that globalization is currently taking, Cameron said: “I believe in responsible capitalism, growth has to be felt in people’s lives... We need business, big business, to step up to do far more, to deliver a fair economy, the more just society, and the sustainable environment that we want to see.”

The second day of the Dubai Diamond Conference 2017 under the theme ‘Shaping the future of an interconnected marketplace’ organized by the Dubai Diamond Exchange (DDE), featured a keynote speech from former UK Prime Minister David Cameron, the launch of the Nemesis International diamond polishing factory and the display by Nemesis International, De Grisogono and Christie's of an extraordinary 163-carat diamond necklace to be offered for sale by auctioneer Christie's.

Cameron spoke about a range of issues, particularly the issue of sustainability and ethical business. He began by praising Dubai and its openness, diversity and rule of law, values which Dubai and the United Kingdom share.

“Responsible capitalism is what I believe in. It’s the next logical step. Big business needs to do far more to deliver a fair economy and environment... Business needs to be fair, open and transparent. This is a big opportunity for industry. You can get ahead of the game by being in favour of ethical behaviour. We need to expand transparency across the globe. Many African countries have suffered from a resource curse, and I believe we have to help countries to make the right choices and spread their wealth among their people. That is the responsibility of us all.”

The official launch of the Nemesis International diamond cutting and polishing factory started off Day 2 of the Conference. The state-of-the-art facility is seen as completing the range of services that Dubai's diamond trade can offer by providing the highest level of diamond polishing. "We now have the complete package, or one-stop shop," said DMCC Executive Chairman, Ahmed Bin Sulayem. "Dubai has become a major importer of rough diamonds which can now be cut and polished by master craftsmen. This joins the world-class facilities that the Almas Tower offers, including customs, insurance, banking, a Kimberley Process office, and international tenders of a wide range of rough diamonds."

Meanwhile, Christie's displayed the 163.41-carat emerald-cut diamond owned by the Geneva-based luxury jeweler, De Grisogono. The auction house said it is the largest D-color flawless diamond to ever come to auction and will be offered for sale on November 14 as a highlight of Christie’s Magnificent Jewels sale in Geneva. The diamond, cut from a 404-carat rough discovered in February 2016 in the Lulo mine in Angola, was displayed at the Conference as part of a world tour. It is the 27th biggest rough white diamond ever discovered and the largest in Angola, said Fawaz Gruosi, founder of De Grisogono, who purchased the rough diamond. A team of 10 diamond-cutting specialists were involved in mapping, plotting, cleaving, laser-cutting and polishing the extraordinary diamond which took almost a year to cut.

A panel on ‘Lab-grown diamonds and their disclosure: Is there a problem’ sparked much debate. “We don’t have a problem with synthetics as long as they are disclosed. Lack of disclosure is our main concern. We rely on out 30 affiliated bourses to aid us in this”, said, World Federation of Diamond Bourses President Ernie Blom.

The next panel debate looked at ‘Bankability, transparency, innovation’, with a range of banking figures discussing the reasons for the increasing difficulty faced by diamond firms in securing credit. Bankers agreed that further efforts to boost transparency were needed.

The conference then moved on to discuss the issue of KP Reform: A reality or a never ending story? where the discussion focused on how far the KP has advanced in the 14 years since it came into being and what should be its future path. The impact of value added tax (VAT) or GST on wholesale diamond trading; Diamond trading centres – working together to create global wealth was the next discussion with participants providing insights as to the likely impact of the taxes. The final panel discussed Tender or auctions: temporary phenomenon or new business of the future? The panellists looked at this relatively new marketing method and how they are effecting the prices being paid by the industry for rough goods.

DDE Chairman Peter Meeus said the third edition of the Dubai Diamond Conference, which took place in Dubai's Almas tower which houses the DDE, had once again illustrated its importance and the ability of Dubai to bring together international leaders of the diamond industry ranging from African Ministers to traders, financiers and world-renowned jewelers. The conference provided an opportunity to build relationships between companies and governments in producing and consuming countries further highlighting the pivotal role that Dubai plays in the global diamond trade for diamonds.