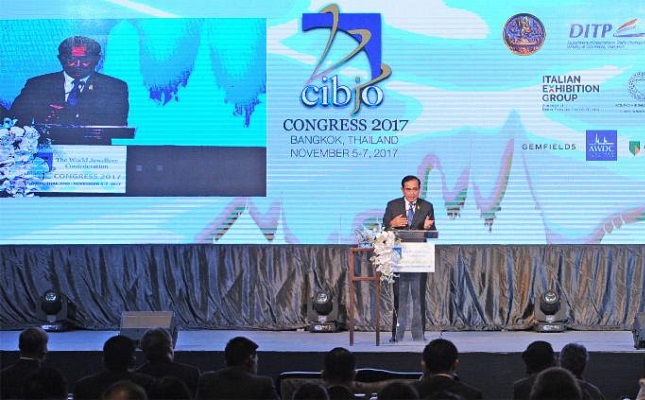 (IDEX Online) – CIBJO, the World Jewellery Confederation, has successfully concluded its annual congress in Bangkok which took pace from November 5-7 and brought together from around the world some 150 official delegates and a total about 300 participants, and covered a range of issues on the agenda of the international gemstone and jewelry industry.

There was a strong focus on responsible sourcing, Corporate Social Responsibility and sustainability, particularly in the colored gemstone sector. The event was preceded by the three days of pre-congress steering committee meetings and the first World Ruby Forum.

And among the other highlights of the congress was the ratification by CIBJO's Diamond Commission of several changes in its Blue Book requested by the International Diamond Council, paving the way for IDC's set of diamond nomenclature to be merged with that of CIBJO. Consequently, from now on the CIBJO Diamond Book will be regarded as the single definitive guide to nomenclature in the diamond business.

Furthermore, the Diamond Commission ratified a proposal calling on the CIBJO President to begin a dialogue with synthetic diamond producers, with the goal of bringing them into the greater jewelry industry forum, protecting the interests of consumers and the industry alike.

In his speech, General Chan-o-cha stressed his government's support for the Thai gem and jewelry industry, which is the country's third largest export earner. "We need to take care of the people in the value chain to make sure that nobody is left behind, especially the lower income workers, and we also want to ensure transparency and good governance," he stated. "Thailand is committed to improving our products and to becoming a global jewelry hub in the next five years, and I hope we can grow stronger together and enable Thailand to secure this vision."

In his address, Cavalieri stressed the role of the congress and the mission of the World Jewellery Confederation. "As most of you know, a CIBJO Congress is not a commercial event. There are no gemstones or jewelry on sale. We gather each year to talk about rules and regulations, standards and ethics, and strategies for the years ahead. We do so out of the firmly-held belief that, in order to succeed in business, we have to conduct our affairs in a manner that is beyond reproach, and we need to see over the horizon. The subjects we address make that possible," he said.

"We have no illusions. Jewelry and gemstones are luxury products that consumers purchase because they want to, and not because they have to. For us there is no margin of error. If we lose the confidence of our consumers, and in so doing undercut the value of our product, we will not remain in business, let alone prosper," he added.

Given that the congress was being held in one of the world's leading colored gemstone centers, many of the speakers and the sessions focused strongly on this sector, and of the growing urgency to formulate for it a viable responsible sourcing policy, which on the one hand will defend the integrity of the product from the perspective of consumers and outside observers, but at the same recognize the critical role it plays in the lives and communities of artisanal and small-scale miners who produce more than 80 percent of its rough.

A particularly powerful session focused on the integrity of the supply chain in the colored gemstone sector moderated by Anne-Marie Fleury, the Standards and Impacts Director at the Responsible Jewellery Council, which co-organized the meeting.

"It is all a question of perspective," said Sean Gilbertson, the CEO and President of Gemfields, the world's largest colored gemstone mining company, said. "We can talk clinically about artisanal mining from the comfort of a luxury hotel in Bangkok, but if I was an artisanal miner working in a protected national park and my family depended on what revenue I could produce to survive, I am pretty sure that I would do no differently from what they are doing."

Gilbertson revealed that Gemfields had developed with Gübelin Gem Lab in Switzerland a special resin made of nano-particles which imperceptibly impregnates a gemstone that has been left in the material for a period of about six hours. While there is no apparent effect on the gemstone's appearance or composition, the durable material leaves an indelible marker that can indicate the stone's origin and the date it was mined. Gemfields, which will make the technology available to others in the market, is confident that it could assist in advancing traceability in the sector.

Addressing the issue of supply chain integrity in the colored gemstone trade, Cavalieri said that government involvement is necessary to help verify the veracity of the source of supply, and that element, coupled with self-administered due diligence at the industry level, is likely to provide the most viable alternative available. "I propose that we work towards creating a Kimberley Process-type structure for rough colored gemstones, which will enable the industry to demonstrate the integrity of its chain of distribution through a combination of government monitoring, and self-administered due diligence, he said.

"I am not naïve," Cavalieri continued. "I realize the conditions in the diamond industry are vastly different to those in colored gemstones. In diamonds, just a handful of large companies control well over 90 percent of world supply, whereas in colored gemstones some 80 percent of supply comes via literally thousands of small and artisanal miners. But if we, as an industry, take the lead and work on an individual basis with governments that are eager to legitimize their artisanal colored gemstone sectors, then we can grow organically the group of nations working within a KP-type structure. At the same time, we can provide a legal and non-discriminatory path to the market for artisanal colored gemstone miners who otherwise may find themselves locked out."

The congress saw CIBJO's Marketing & Education Commission release a 60-page book, entitled "People Our Greatest Asset," which is a guide to building a winning team of employees in the jewelry business. Authored by Jonathan Kendall, President of the Marketing & Education Commission, it will shortly be made available for downloading on the CIBJO website, and include examples and templates of recruitment advertisements, employee assessment and employment review forms, examples of incentive programs and much more.

The CIBJO President reported that several invitations had been received from different centers offering to host the 2018 CIBJO Congress. He said that they are being reviewed, and an announcement about the venue and dates of the next congress will be made, hopefully within the coming two months.

Meeting on the final day of the of the congress, the CIBJO General Assembly elected Cavalieri to another two-year term as CIBJO President. For the first time, three Vice Presidents were elected: Roland Naftule of the United States, Eli Avidar of Israel, and Corrado Facco of Italy. Marc-Alain Christen of Switzerland was reconfirmed as the organization's Chief Financial Officer, and a new Board of Directors was elected, also for a two-year term.

The 2017 CIBJO Congress was hosted at the Shangri-La Hotel in Bangkok by the Department of International Trade Promotion (DITP) and the Gem and Jewellery Institute of Thailand (GIT), both of which fall under the jurisdiction of the Thai Ministry of Commerce.

CIBJO Posts Agendas And Related Documents Ahead Of Congress