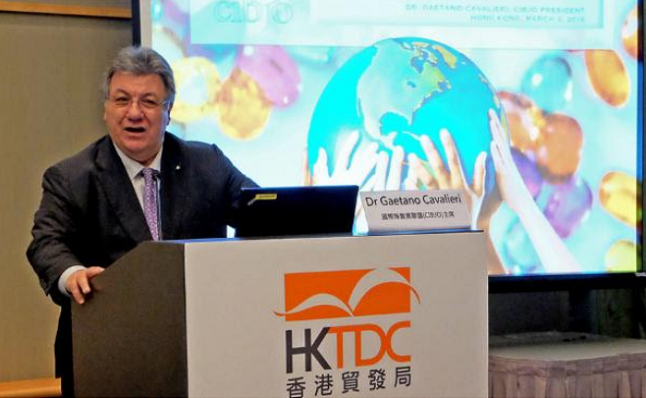 (IDEX Online) – Speaking at an industry seminar in Hong Kong, CIBJO President Gaetano Cavalieri has urged both government authorities and jewelry and gemstone associations to incorporate the standards and nomenclature contained in the CIBJO Blue Books into their respective national guidelines, as a measure designed to facilitate more transparent and efficient international trade.

The CIBJO Blue Books are definitive sets of grading standards and nomenclature for diamonds, colored gemstones, pearls, coral, precious metals, and gemological laboratories. They are compiled and are consistently updated by relevant CIBJO Commissions, whose members include representatives of trade organizations and laboratories active in the diamond, colored gemstone, pearl, precious metals and jewelry industries.

"It is essential because we work in an industry where there is almost no single item produced that does not includes elements that were either mined, processed and manufactured in multiple countries," Cavalieri said, during a seminar on March 3 at the Hong Kong International Jewellery Show organized by the Gemmological Association of Hong Kong and the Innovation and Technology Commission of the Hong Kong SAR Government.

"What this means is that gemstones, jewelry components and complete jewelry items are constantly crossing borders, and are being handled and valued by different people in each of the countries they pass through. It is absolutely essential that members of our industry in one country can communicate accurately with their colleagues in other countries, using a common professional language.

"The application of the Blue Books is voluntary, but increasingly they are becoming recognized as common standards," Cavalieri noted.

He listed milestones in this process:

"The process of developing the Blue Books is remarkable, and is a testament to the dedication, professionalism, expertise and voluntary spirit of members of our community," Cavalieri said, calling on members of the industry in Hong Kong and China, to work with CIBJO to expand the relevance to more countries and product categories, including Fei Cui, which involves jade and jadeite materials that are popular in the region.

"The CIBJO Commissions that compile and update the CIBJO Blue Books do not work in isolation. They are made up by industry members, like yourself, who are ready to contribute," he stated. "Members of the Hong Kong and Chinese industries have long played key roles in our commission, and this practice needs to continue."

(Pictured above): CIBJO President Gaetano Cavalieri addressing the jewelry industry standards seminar at the Hong Kong International Jewellery Show on March 3, where he urged acceptance of the CIBJO Blue Book standards and nomenclature as a 'common language' for the international jewelry and gemstone trade.