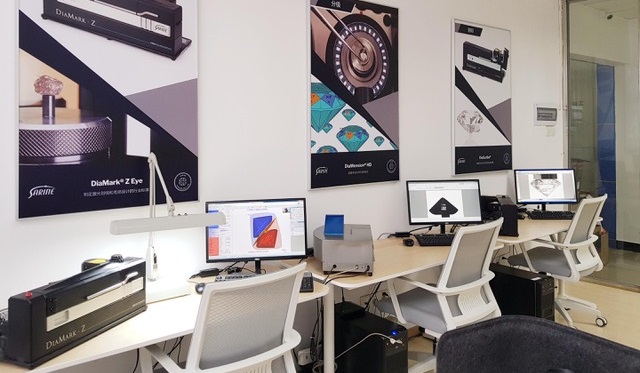 (IDEX Online) – Sarine Technologies Ltd has opened a new Galaxy® service centre for the scanning and mapping of internal inclusions in rough diamonds in the Sha Wan Jewellery Park, in the Panyu District of Guangzhou, servicing the rough diamond trade and diamond manufacturers there and in China, in general.

The new Guangzhou service centre is the ninth one, following those opened between 2010 and 2012 in India (Surat and Mumbai), Israel, Belgium, Russia, South Africa, Namibia and Botswana. It is operated by D-Authority, a local business venture that has been providing Sarine with professional pre- and post-sales services for 15 years.

Sarine said it is confident this new service centre will be able to offer excellent and timely rough diamond scanning, planning and additional services to the diamond industry in Panyu. The service centre was opened at the invitation of the Guangzhou Diamond Exchange, as part of broad government actions, including simplification of procedures and reduction of taxes, taken to boost the productivity of the local diamond trade and to halt the erosion of the local production base, which has seen activity shift elsewhere and overseas.

Sarine was allocated space in the Administrative Services Building, adjacent to the Diamond Exchange, the National Gemmological Testing Centre (NGTC) and other central services providers.

David Block, CEO of the Group, commented, "It has been a long time coming, but with new demand in China from smaller industry players, for whom the acquisition of a Galaxy system is non-economical, it was only appropriate that we offer our customers there too access to the unmatched Galaxy technology. We believe the opening of the service centre in Guangzhou will benefit the diamond industry in China."