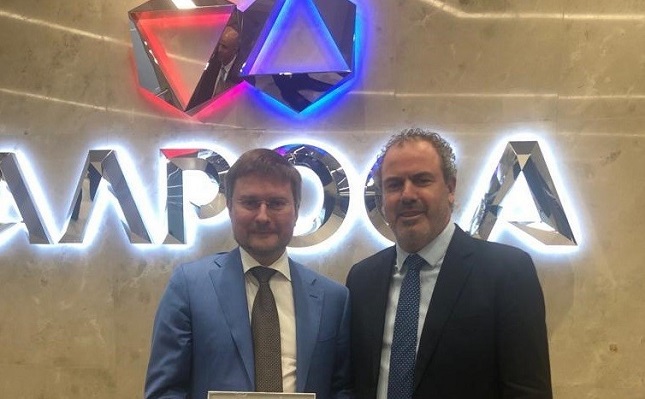 Dvash said that the delegation sought IDE's cooperation with the mining giant and to increase the supply of Alrosa rough goods to Israel. He noted that with the drop in sales of rough diamonds, it is significant that a large group of serious Israeli diamantaires want to buy rough from ALROSA. "This is a brave and important statement, which shows the strength of the Israeli diamantaire, who has a great deal of knowledge and experience, has a strong financial base and wants to buy rough from you, especially during a difficult period. As President and businessman, I see this as an opportunity, not as a crisis, and we believe in cooperation with you," Dvash said.

Referring to his recent visit to the Israel Diamond Exchange, ALROSA CEO Ivanov emphasized its advanced level of development as well as its vibrant and diverse character. He praised the IDE's multifaceted approach to business development aimed at promoting not only traditional models, but also various start-ups and technologies within the Diamond Tech Innovation Center. Ivanov concluded by saying that ALROSA is interested in strengthening cooperation with the Israeli bourse.

The visit was coordinated with the assistance of the Israeli Embassy in Moscow and the Ministry of Economy. Israeli Ambassador Gary Koren and Economic Attache Yakir Davidson joined the Moscow meetings.