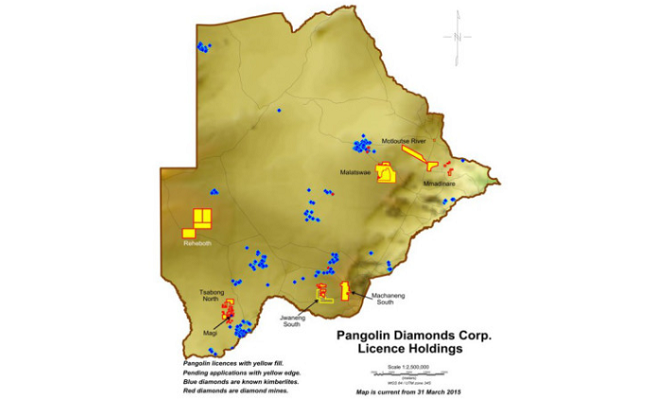 (IDEX Online) – Pangolin Diamonds Corp. has recovered a white diamond from its wholly-owned Jwaneng South Kimberlite Project in an area 100 km south of the Jwaneng diamond mine in the Southern District Botswana.

The diamond was recovered from an unscreened 60 litre sample collected within a 10 square metre area of a GPS controlled sample site, the firm said. This material was dry screened in the field to recover the +0.425 – 4.0 millimetre size fraction. The sample was then transported to Francistown, Botswana and processed through Pangolin’s 1-tph DMS plant.

The white diamond measuring approximately 1 mm in its long axis is a fragment of the original diamond. The presence of a chrome spinel inclusion on the broken surface of the diamond is interpreted to be an indication that the diamond is close to source and transport distance is minimal. In addition to the diamond, ilmenites with surfaces showing little or no wear through transport have also been recovered from soil samples from the same area during three phases of soil sampling.

An additional groundmagnetic survey extending the existing survey area to the south and to the east is currently being implemented. In addition, high density soil sampling is being undertaken over the identified groundmagnetic anomaly.

An evaluation has commenced on the AK10 diamondiferous kimberlite pipe, located in the Orapa Kimberlite Field. The AK10 kimberlites located 4 kilometres east of the Karowe diamond mine owned and operated by Lucara Diamonds Corp. A detailed groundmagnetic survey and a soil sampling programme consisting of 187 x 60 litre pre-screened samples have been completed. In addition, a compilation of the historical exploration data is in progress. Results of the groundmagnetic survey and soil sampling programme will be announced once analysed and the data has been interpreted.

Pangolin Reports No Kimberlites Found at Motloutse Project in Botswana