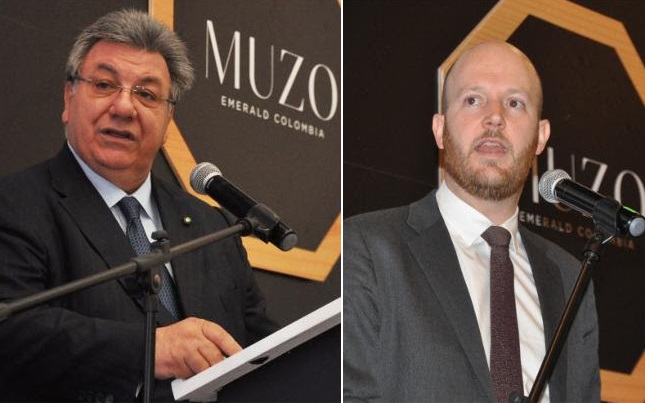 (IDEX Online) – The 2018 CIBJO Congress opened yesterday (Monday) in the Colombian capital of Bogotá, with a strong focus on responsible sourcing in the jewelry industry.

This included the introduction of a Responsible Sourcing Guidance document, which will serve as a reference for responsible sourcing practices developed and applied by industry organizations and commercial bodies worldwide, and will come to have the status of a CIBJO Book. To oversee the process, a Responsible Sourcing Commission was established.

"At the end of last year, we decided to investigate whether the methods by which we have compiled our standards for diamonds, colored stones, pearls, precious metals, coral and gemological laboratories could be applied to the subject of responsible sourcing," explained CIBJO President Gaetano Cavalieri. "We asked ourselves, would it be possible to create a responsible sourcing protocol that could be universally accepted, which would meet the ethical standards that our industry expects from itself, and at the same time be acceptable from the perspective of the international community?"

Cavalieri explained that an operating principle of the Responsible Sourcing Guidance document was that it would be inclusive, meaning that there is an expectation that the standards, guidelines and systems that it describes can reasonably be applied by all members of the industry, irrespective of size or financial capacity.

"Like the other CIBJO Blue Books, the standards and guidelines contained in the Responsible Sourcing Guidance document are recommendations, as opposed to conditions of membership. However, they should come to serve as benchmarks for responsible sourcing systems developed and applied by industry organizations and commercial bodies worldwide, and for governments that may seek to create viable regulatory systems. Also, like the other Blue Books, the Responsible Sourcing Guidance will be a living document, which will be reviewed on a constant basis, and amended if changing conditions make it necessary," Cavalieri stated.

CIBJO's Responsible Sourcing Guidance is based on the OECD Responsible Supply Chains of Minerals from Conflict-Affected and High-Risk Areas, and supports the Kimberley Process and UN Guiding Principles on Human Rights.

Delivering keynote addresses, both during the Opening Session and during a special Responsible Sourcing Session that was held on the first day of the CIBJO Congress, was Tyler Gillard. He heads the OECD's team working on due diligence in the mining and metals, financial, textiles, oil and gas and agriculture sectors, and additionally leads the multi-stakeholder negotiations for the OECD Due Diligence Guidance for Responsible Supply Chains of Minerals from Conflict-Affected and High-Risk Areas. CIBJO had consulted with the OECD and other key industry associations in formulating its guidance document.

"CIBJO's new initiative ensures a level playing field and is a common and consistent common reference among different actors in the supply chain," Mr. Gillard said. "It also helps smaller players to become familiar with internationally accepted due diligence and responsibility, and we are encouraged by the progress taken by CIBJO to promote due diligence, transparency and integrity of the jewelry industry supply chains."

Gillard insisted that the OECD understands the challenges faced by the many smaller and medium-sized bodies in the jewelry industry in instituting its due diligence standards, and especially small-scale and artisanal miners. "We don't require full traceability from mine to consumer, but that you are exhibiting a strong degree of commitment. I emphasize that due diligence is a process, and that it won't be completed overnight. But you must show good faith that you are doing it," he said.

The President of the new Responsible Sourcing Commission is Philip Olden, who has developed responsible sourcing protocols and guidance for leading international companies in the jewelry and gemstone sectors, and who oversaw the creation of CIBJO's Responsible Sourcing Guidance document. The commission's two vice presidents will be Tiffany Stevens, President and CEO of the Jewelers Vigilance Committee in the United States, and Erik Jens, an independent financial consultant for the jewelry and gemstone sectors and former head of the diamond and jewelry division at ABN AMRO Bank.

Serving as the official venue for the meeting of the CIBJO Assembly of Delegates, the CIBJO Congress gathers the members of national jewelry and gemstone associations from more than 40 countries and representatives of many of the industry's most important commercial bodies. During the event, the organization's Diamond, Coloured Stones, Pearl, Coral, Precious Metals and Gemmological Blue Books, which are industry's most widely accepted directories of uniform grading standards and nomenclature, are discussed and updated.

The congress is being hosted by Fedesmeraldas, the National Federation of Emeralds of Colombia, and CDTEC, Colombia's leading gemmological institute.