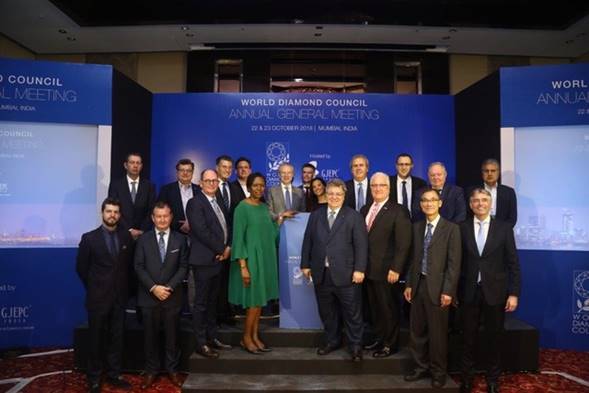 (IDEX Online) – The World Diamond Council (WDC) held its 14th Annual General Meeting (AGM) in Mumbai, reaching consensus on critical areas of reform for both the Kimberley Process and the WDC System of Warranties (SoW).

Resolutions for further improvement of a responsible supply chain and enhanced self-regulation exercise within the WDC System of Warranties (SoW) Guidelines were passed, the WDC said in a statement. "A Board- instructed strategic planning committee will develop a member’s toolkit to help in the implementation of the guidelines respecting the realities and practicalities of the diamond supply chain. These guidelines will introduce the strongest level of adherence to date for SoW statement users, requiring adherence to universally accepted principles on human and labor rights, anticorruption and anti-money laundering in support of mandatory Kimberley Process Certification Scheme (KPCS) implementation and including the inclusion of OECD due diligence guidelines. Changes will be implemented on an ongoing basis and will be included in the upcoming 2021-2025 WDC Strategic Plan.

"WDC Board members also re-affirmed their continued commitment to KP reform with agreement to push forward on an expanded definition of conflict diamonds to address human security and environmental concerns. Other KP reforms agreed were for a permanent secretariat and strengthening of the peer review mechanism, both of which Administrative Decisions have been respectively submitted to the KP Chair for discussions and vote at the upcoming KP Plenary next month. Board members also agreed to support the other KP reform items, such as the review of the Core document and multi-stakeholder fund which would focus on capacity building."

The WDC Board meeting included the appointment of Edward Asscher as Vice President, the re-election of Ronnie Vanderlinden as Treasurer, and re-appointment of Udi Sheintal as Secretary-General.

Stephane Fischler, president of the WDC, said, “This year’s session was important for many reasons, not the least of which is that our members truly embraced the spirit of collaboration and cooperation which accelerates our ability to drive important change within the industry and through our role as industry observers to the KP. We are grateful to our hosts The Gem and Jewellery Export Promotion Council (GJEPC) for facilitating this year’s annual meeting and we look forward to the KP Plenary next month in Brussels where many of this year’s resolutions are expected to be confirmed.”

In related news, the WDC has continued its efforts to advocate for positive change by working to resolve one of the most pressing needs of the KP: bringing more African nations and voices into the process. To this end, prior to the WDC AGM, the WDC Executive Director Marie-Chantal Kaninda addressed the European Union in their capacity of KP chair to educate and explain the criticality of the African voice to the success of the KP and ways the EU can help to encourage participation in the process. Ms. Kaninda also addressed a session held at the African Union hosted by Ambassador Albert M. Muchanga, African Union Commissioner for Trade and Industry. This was the first time that the WDC addressed this distinguished group and Ms. Kaninda discussed how the KP could be used as a development tool for African nations, how the expansion of the conflict diamond definition could lower risk and increase revenue for compliant nations, and the role of the Permanent Secretariat to improving the KP process.

WDC Executive Director Marie-Chantal Kaninda concluded, “More than 60 percent of the world's diamonds come from African soil, yet many of its nation’s have yet to reap the social, economic and infrastructure benefits that this resource brings. It is our obligation as an industry to ensure that their voices are heard so that we can create a path for positive change for these vital diamond producing countries. It is through participation and compliance with the Kimberley Process that all nations together will prosper through ethical and responsible sourcing.”