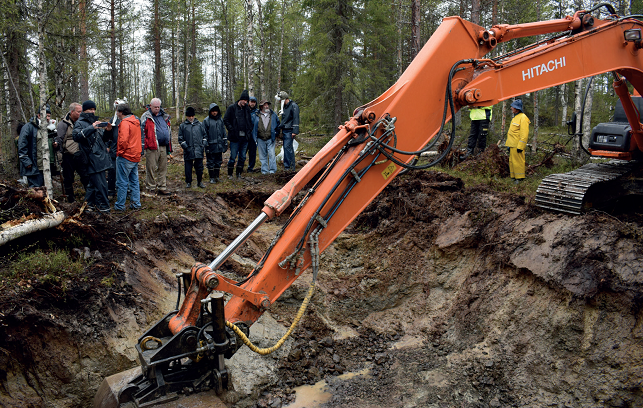 A group of investors from Europe and Canada at the Timantti Diamond Project near Kuusamo, Finland, in May 2019. The photo shows part of the Grey Wolf Kimberlite excavated after removing less than two meters of overburden.

If it is up to the exploration company Arctic Star Exploration Corp. of Vancouver, Ca., the Timantti Diamond Project, near Kuusamo, Finland, will become a diamond mine, which actually would turn Finland into the first-ever diamond producing country in the European Union.

Diamond indicator minerals (DIMs), such as pyrope garnet and chromite, were both found in the kimberlite samples from near surface, i.e. after removing less than 2 meters of overburden at the Grey Wolf Kimberlite. Instead of bulk sampling the four discovered kimberlites, Arctic Star will first look for additional kimberlites on its property and sample those and decide which kimberlites are interpreted to be the most promising for bulk sampling.

"Kimberlites are likely to occur in fields - also known as clusters - which typically contain 30 or more separate kimberlites. The Wolf kimberlites are just the first discoveries in a more extensive cluster. There is good evidence for the existence of this field in the public domain. This data shows regional distribution of kimberlitic indicator minerals and diamonds in surficial tills. The Exploration Reservation will allow Arctic Star to explore the entire region," Roy Hugh, the project's lead geologist stated.

Arctic Star has secured a land package of around 2,000 km2 (1,171 hectares in two Exploration Permits over the Wolf Kimberlites plus 193,700 hectares in granted "Exploration Reservations" giving Arctic Star the exclusive claim staking rights for two years.

Arctic Star has assembled a team of renowned, seasoned and famous professionals to advance the Timantti - Finnish for "diamond" - project, with state-of-the-art exploration techniques. It is expected that the Timantti project will develop into a world-class diamond deposit in the Finnish portion of the Karelian Craton - comparable to the world-class, multi-billion-dollar diamond mines found on the Russian portion of the same Karelian Craton.

Watch the three-minute video to catch a glimpse of the project: https://youtu.be/prncOgcjUH8