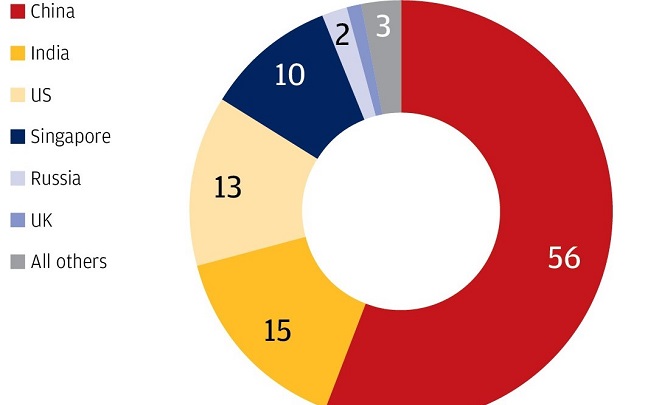 The technological disruption seen in medicine, autos, banking and countless other sectors is spilling over into diamonds, where an oligopoly of just four miners controls more than 60 per cent of production, according to consultancy Bain & Company.

It is happening as China taps the know-how it developed in becoming the world's biggest maker of synthetic diamonds used primarily in the industrial cutting tools market.

While synthetic diamonds right now only account for 3.5 per cent of the world's diamond jewelry, the share could grow to six per cent in four years, and even more later, says Yahoo News interviewed Paul Zimnisky, a New York-based independent diamond sector analyst who said that during the past "few years Chinese producers had been upgrading existing equipment to produce larger, better-quality synthetic diamonds for use as jewelry. China already has the infrastructure in place which allows for high production scalability of higher-quality synthetic diamonds, as existing high-pressure high-temperature equipment is upgraded," Zimnisky said.

Five years ago, a "fake" diamond cost about 10 percent less than the real thing. Now the discount is about 50 percent. And within five years, Zimnisky estimated, it could be 90 percent.

"Technology has progressed rapidly, not only are the lab-grown diamond producers able to produce bigger stones â€¦ but also better clarity and color," Georgette Boele, senior precious metals and diamonds analyst at Holland-based bank ABN AMRO, wrote in a report in January.

"There seems to be a higher acceptance â€¦ probably driven by perception that lab-grown diamonds are more sustainable and the price more attractive."

The "sustainability" issue is becoming a bigger selling point for lab-grown diamonds.

The diamond industry has been subject to much criticism over its impact on the environment and workers' health. In addition, so-called "conflict" or "blood" diamonds have been used pay for wars and terrorist activities, according to a number of investigative reports.

Huanghe Whirlwind International, a Henan province-based synthetic diamond maker, uses sustainability as part of its sales pitch, saying its cultured diamonds are "perfect for those seeking to minimize the environmental impact of a jewelry purchase" since they do not require mining and are "conflict free".

Dubai Diamond Conference to be headlined by disruption and technology

Love will keep us alive