A Tale of Two Cities: Moscow and Gaborone

It used to be that having a supply contract with De Beers, having a Sight, was a top honor. It was a stamp of approval that you are a top player in the game, a member of an exclusive and elite club. The industry’s reigning Queen, a monolithic power that had great influence over the entire industry, bestowed the great honor. It behaved that way as well.

It was not all bright, as nostalgia might want us to believe. De Beers did not always treat Sightholders very well. It often looked like a Sight was akin to having a license to print money. However the reality was that Sightholders faced many challenges just as rank and file diamond traders do, but if there was one clear truth in the industry, it was that the monarch, even if not omnipotent, was the undisputed ruler.

Many diamonds passed under the loupe, and the crown is now facing challenges. It’s not a bloody courtyard coup, nor a swift change of power, but it is taking place continuously and steadily. After 100 years, De Beers appears to be losing control of its leading position, as Alrosa rises to claim the title.

Gaborone vs. Moscow
Former railway executives lead both companies. Philippe Mellier, CEO of De Beers, was appointed by Nicky Oppenheimer, former chair and a major stakeholder of De Beers. Oppenheimer may have once had sentimental feelings towards the company, but sold his family’s 40% stake in it when he realized that he could not lead the company to greater heights.

At Moscow-headquartered Alrosa, President Fyodor Andreev was appointed by the Putin government, which sought to consolidate its hold on the company, believing in its future. Andreev brought a new spirit to the company. Contrary to the popular view of a typical Soviet, government-owned company, Alrosa has a reputation for being a squeaky-clean company, free of corruption or bribes. And many of the executives of the diamond miner are professional engineers with a focus on efficiency.

De Beers is going through constant changes, such as moving DTC from London to Gaborone. Some of the changes are structural, but it still has the same broad approach – it mines diamonds and sells rough, it has a retail diamond brand, a 50/50 stake in a diamond jewelry retailer, a technology development arm, a lab-made diamond operation, even a diamond certification lab.

Alrosa, on the other hand, is very focused, it mines and sells diamonds. With the small exception of selling polished diamonds for the sake of price discovery, rough is all it does. It seems not to care about the global economic scenario, and does not slow down its production in adverse economic times. If the goods don’t have a buyer, they are offered to Gokhran, the State Precious Metals and Gems Repository. The Gokhran is a privilege that provides Alrosa with a unique backing among diamond miners. Would Alrosa consider slowing down production if it did not have the country’s backing in the form of Gokhran purchases? There is no telling, but it is reasonable to assume the company would act differently.

There is also an issue of mentality. It’s almost open season on De Beers, with polite questions to outright bashing taking place. I don’t subscribe to this mood and disagree with it. There is, however puzzlement over how it handles some matters, including ethical ones. Over the years, a number of Sightholders were involved in actions that should have resulted in ending their contract supply based on De Beers' Best Practices Principles guideline. This included alleged involvement in the GIA bribing scandal of a few years ago, to the most recent mixing of lab-made diamonds in parcels of natural goods. To date, no one was removed – discreetly or otherwise. On several occasions, the company has said that everyone is innocent until proven guilty.

When concerned with the public image of diamonds, there is no room for maneuver on the finer legal points, especially if the company has all the evidence needed to take action.

An Alrosa client recently told me that if you send Andreev a basket of fruits to his hotel room in Antwerp, he will send it right back. The message was clear, the client told me: you get the goods based on your ability to pay for them and sell them. Everything else is background noise. The contracts are simple, the cost of application is low, especially compared to the hundreds of thousands of dollars some spend on their Sight applications.

De Beers wants to know everything about their clients, while Alrosa is a lot less intrusive. De Beers may be unhappy with undisclosed lab-made diamond sales, but takes limited action. Alrosa, I understand, has a clause in its contract forbidding any business with lab-made goods. They won’t wait for a court to convict anyone, they’ll simply kill the contract, or at least that is the understanding that everyone has. That seems to be enough.

Finally, there is the issue of financials. In 2012, with almost 20% less revenue than that of De Beers, Alrosa’s profit was 114% higher at $1.1 billion. In the first half of 2013, Alrosa’s profits were $445 million. A conservative (and favorable) estimate puts De Beers profit in the period at about $250 million. 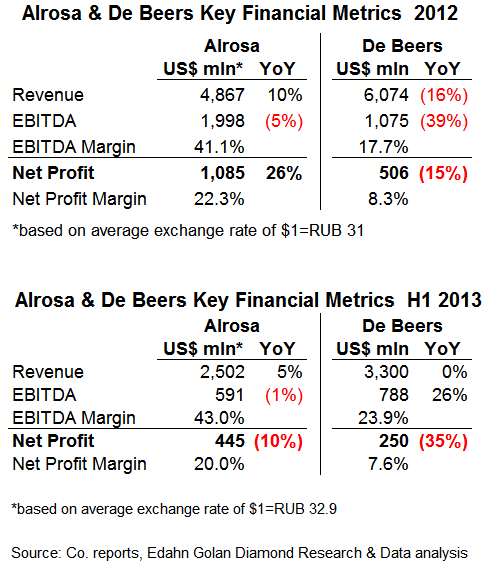 Looking forward, De Beers’ reserves are shrinking, while Alrosa is sitting on a massive proven reserve that will fuel its operations for many decades to come.

Producing more, with a much higher profitability, and a very focused vision and direction, Alrosa seems to be racing towards the throne. It is also very much interested in it, too. As Alrosa First Vice President – Executive Director Igor Sobolev states plainly, they’ll be the top diamond firm in 2018.