(IDEX Online) – Jewelry and watch sales in the U.S. increased 8.8 percent year-over-year in May. Sales totaled more than $6.8 billion in May.

and statistics on jewelry industry inflation for May 2013 is available to IDEX Online Research subscribers and IDEX Online members here.

The continually growing jewelry and watch sales are outpacing the rise in overall retail sales increases in the U.S., up 5.0 percent in May, and a sign of increase in discretionary spending by American consumers.

Since November 2012, total jewelry sales have been growing by some 8 percent monthly, compared to the less than 6 percent monthly year-over-year growth experienced during most of 2012.

Watch sales in May increased by 10.2 percent compared to May 2012, totaling $912 million. Since November 2012, watch sales have increased by double-digit figures year-over-year every month except in February.

Even though smaller in total sales volume, in the eight months between October 2012 and May 2013, growth in watch sales in the U.S. outpaced growth in jewelry sales, according to data from the U.S. Department of Commerce.

American consumers are voting with their wallets – and showing a growing interest in jewelry in 2013. This is important news for wholesalers and suppliers, such as diamond manufacturers, which have concluded that the U.S. is not a growth market. The rise in sales, especially compared to total retail sales, is a reason to revise the gloomy conclusion. 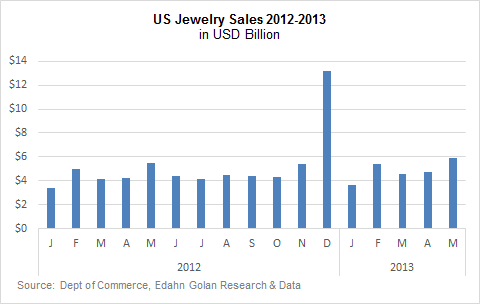 The full analysis and statistics on jewelry industry inflation for May 2013 is available to IDEX Online Research subscribers and IDEX Online members here. Click here for more information on how to subscribe or become a member.

French Official Revises Up Value of Cannes Theft to $136M