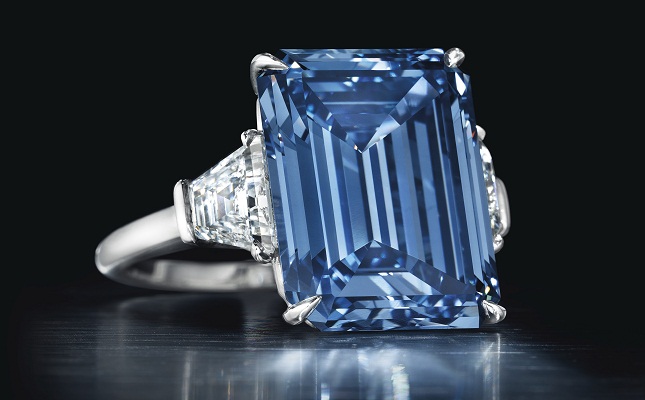 (IDEX Online) – The new year is now officially here, just barely over the doorstep, and with it the promise of new amazing gems that will crown this year's sales.

But before we bid goodbye to 2016 forever, it is time to take a small step back and look at the major gem achievements of last year. 2016 was a busy year when it came to auctions of colored diamonds, and what fascinating gems it brought with it!

Yellow colored diamonds are known as veteran members on the "most desirable" list of the auction scene every year. Accordingly, several large- straight-color items were sold during the year.

It started in April at Christie’s Magnificent Jewels & the Jubilee Ruby auction in New York when two noteworthy Fancy Vivid Yellow diamonds were sold. The first was a round-cornered rectangular modified brilliant-cut stone weighing 54.62 carats, and with a VVS1 clarity grade. It was mounted in an 18K gold ring, and sold for $2,461,000. The second was a modified rectangular-cut cornered diamond with a VS2 clarity grade weighing 30.48 carats, mounted in a platinum 18K gold and diamond ring which sold for $1,325,000.

Then, a month later, at Christie’s Magnificent Jewels auction in Hong Kong, a square-shaped Fancy Vivid Yellow diamond, VS2 clarity-graded weighing approximately 10.76 carats, mounted in gold and trapeze-cut diamonds, was sold for $1,526,177. Also in May, at Sotheby’s Magnificent Jewels and Noble Jewels auction in Geneva, a briolette-shaped Fancy Intense Yellow diamond weighing 81.40 carats and displaying a VS2 clarity was sold for $2,836,065.

These three yellows were followed by a 51.06-carat radiant-shaped Fancy Intense Yellow diamond displaying VS1 clarity, which was sold at Christie’s Magnificent Jewels & the Cullinan Dream auction in New York in June for $1,625,000.

The trend continued throughout the year, and the fourth quarter noted a few significant yellows as well. In October, Sotheby’s Magnificent Jewels and Jadeite Hong Kong auction sold a 10.81-carat oval-shaped VS2 clarity grade Fancy Vivid Yellow diamond accented with circular-cut diamonds, mounted in an 18k white and yellow gold ring for $1,248,139.

Pink diamonds continued to spur excitement and achieved staggering prices. The first stone brought to the spotlight was a modified cushion-cut Fancy Intense Purple-Pink VS1 clarity diamond weighing 10.07 carats, mounted in a platinum, gold and colorless diamond ring, accompanied by a GIA report, a working diagram indicating that the clarity may be improved, and a supplemental letter stating that the diamond had been classified as a rare Type IIa diamond. The stone was offered at the Christie’s Magnificent Jewels & the Jubilee Ruby auction in New York in April, and sold for $8,845,000.

But all these sales were just teasers for the real blockbuster! In Sotheby's Magnificent Jewels and Noble Jewels May auction in Geneva, an extremely rare 15.38-carat pear-shaped VVS2 clarity Fancy Vivid Pink diamond, known as the Unique Pink, sold for $31.6 million, making it the most expensive fancy vivid pink diamond ever to sell at auction. The diamond was accompanied by a GIA report and a Type IIa confirmation letter.

The Unique Pink hammer price eclipsed the previous record for a fancy vivid pink diamond set by the Sweet Josephine at a Christie's auction in November 2015.

After such a sale, all other sales of pink diamonds seemed to pale into insignificance, yet a few sales from the following events during the year are still worth mentioning. These are the most important ones:

In Sotheby's Geneva, at the same Unique Pink May auction, a modified pear-shaped Fancy Pink diamond weighing 18.51 carats and displaying VVS1 clarity sold for $9,773,672. The diamond was accompanied by two letters, one stating that the diamond may be internally flawless after minor re-polishing, and another that it is a Type IIa diamond.

Christie's Geneva auction in November achieved the sale of a 9.14-carat pear-shaped VS2 clarity Fancy Vivid Pink diamond for $18,259,176, or nearly $2 million per carat.

The first was the De Beers Millennium Jewel 4, an oval-cut diamond weighing 10.10 carats, and graded as Fancy Vivid Blue, Internally Flawless. It was sold for $32,013,223 (or $3.16 million per carat) at Sotheby’s Magnificent Jewels and Jadeite Hong Kong in April.

The second was The Oppenheimer Blue, a VVS1 clarity Fancy Vivid Blue rectangular-cut diamond weighing 14.62 carats, accompanied by a GIA report confirming the rarity and provenance of the gem. This rare gem fetched $58,002,681 at Christie’s Magnificent Jewels May auction in Geneva, blowing away the previous record for a diamond sold at auction by nearly $10 million. (The 12.03-carat polished Blue Moon diamond sold for $48.5 million).

Other interesting blues that sold in May at Sotheby’s Magnificent Jewels and Noble Jewels in Geneva included:

And then, in June, we were exposed to yet another blue giant. The Cullinan Dream, a modified cushion-shaped Fancy Intense Blue diamond, clarity graded as VS2 and weighing 24.18 carats, was offered with a supplemental GIA letter determining its Type IIb structure. It was sold at Christie’s Magnificent Jewels & the Cullinan Dream auction in New York for the unimaginable sum of $25,365,000, and became the largest and most expensive Fancy Intense Blue diamond ever sold at auction.

And this was not the end of it… other blues garnered nice prices in the following events till the end of the year. To name a few:

¾    In November at Christie's Hong Kong auction, a 4.29-carat marquise-shaped Internally Flawless Fancy Vivid Blue diamond (offered by the famous London jeweler Moussaieff) sold for $11,818,873, or $2.755 million per carat, a record for total and per carat price for such a color and size combination.

However, with all due respect to all other colors, this was the year of the green colored diamonds with regard to media buzz and price records. This color is rarely presented at auctions and having three significant stones at auctions in the same year is mind-blowing!

The Aurora Green, a radiant-cut VS2 clarity Fancy Vivid Green diamond weighing 5.03 carats mounted in gold and surrounded by round pink diamonds was the first key player. The diamond was accompanied by a GIA report and a letter from GIA stating that the diamond is the largest Fancy Vivid Green Natural Color diamond the GIA has ever graded. The stone was sold at Christie’s Magnificent Jewels auction in Hong Kong in May for the amazing price of $16,818,983 (or $3.34M per carat).

The second green sale recorded in the same auction was a cushion-shaped VS1 clarity Fancy Vivid bluish Green diamond weighing 2.08 carats. This is the third largest Vivid Green in line, right after the 5.03-carat Aurora Green at the same auction and the 2.52-carat Vivid Green from Sotheby’s Geneva auction back in November 17, 2009.

The uniquely colored gem, accompanied with a letter stating that it is the largest Fancy Vivid Bluish Green diamond that the GIA had graded, was eventually sold for $2,178,035 (or approximately $1M per carat).

The third green purchase, still in May but at a different Christie's venue (Geneva), was a 7.58-carat VS1 clarity Fancy bluish Green round-cornered square-cut diamond that sold for $1,535,866.

The year 2016 was certainly a good year for colored diamonds at the auctions. But, what does this tell us about 2017? Which color will be the dominant color this year and set new records? Clearly, we do not know the answer… only time will tell.