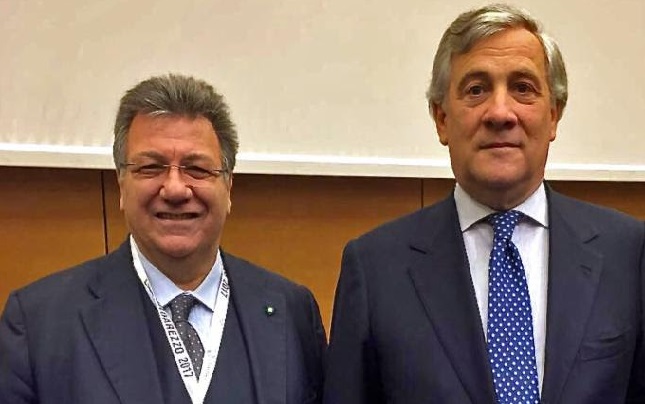 (IDEX Online) – CIBJO President Gaetano Cavalieri has met with Antonio Tajani, President of the European Parliament, to discuss the recently approved Conflict Minerals Regulations approved by the EU legislature in Strasbourg, as well as issues related to the taxation on jewelry imported from the European Union.

The meeting took place in Arezzo, Italy, on May 7, on the opening day of the OroArezzo trade fair, which was inaugurated by Tajani.

The EU Conflict Minerals Regulation was approved on March 16 by a massive majority in the European Parliament, and received the green light from the European Council on April 3. It will be phased in gradually. It will become fully applicable on January 1, 2021, with the intention being that companies use the interim period to adapt to its requirements.

The new regulations primarily affect all but the smallest importers of gold, tin, tantalum and tungsten, as well as refiners and smelters of the minerals within and outside the EU. Not focused on any specific geographic region, they mandate supply chain due diligence from all areas of risk, including a five-step framework for its conduct, which parallels the OECD Guidance for Responsible Supply Chains of Minerals from Conflict-Affected and High-Risk Areas.

By the end of 2017, the commission should be issuing guidelines on the identification of conflict-affected and high-risk areas from which the relevant minerals are sourced. A list of such areas will be compiled and regularly reviewed by external experts designated by the European Commission, which also intends to produce a global list of responsible refiners and smelters.

During their discussions, Cavalieri expressed CIBJO's intention to work together with the European Union. CIBJO, he said, is coordinating together with other representative bodies in the European jewelry industry, and they plan to liaise with the EU to ensure that the regulations are adopted successfully by all sectors of the trade. CIBJO, he stressed, is also committed to defending the integrity of all supply chains in the industry, including those associated with diamonds, colored gemstones, pearls and coral.

Cavalieri also urged the Tajani to work with the jewelry industry to ensure fair reciprocal tax and tariff rates when jewelry is imported and exported. It was agreed that these issues will be discussed further during an official meeting between the EU and a CIBJO-organized delegation.

CIBJO President Gaetano Cavalieri (left) and Antonio Tajani, President of the European Parliament, at OroArezzo in Arezzo on May 6.

CIBJO's 2017 Congress to take place in Bangkok in November