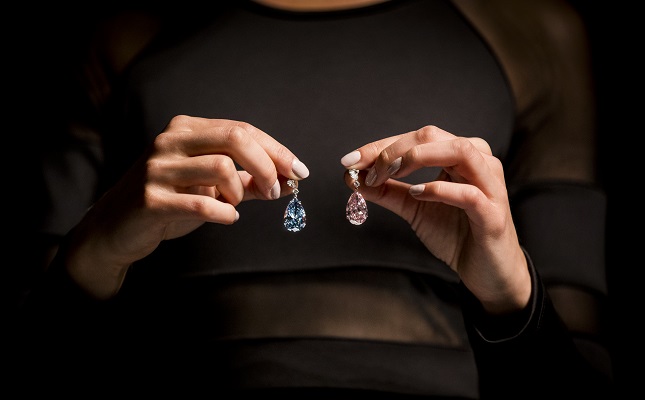 (IDEX Online) – The Apollo and Artemis Diamonds have become the most valuable earrings ever sold at auction, selling at Sotheby’s Magnificent Jewels and Noble Jewels in Geneva for a total of $57,425,478.

The Memory of Autumn Leaves is an Internally Flawless Fancy Vivid Blue diamond weighing 14.54-carats and sold for $42,087,302.

David Bennett, Worldwide Chairman of Sotheby’s International Jewellery Division and Chairman of Switzerland, commented: "The results from the sale – which saw more than 90 per cent of lots sold and three new world auction records – yet again underline the strong demand for top quality diamonds, gemstones and jewels. I am delighted that the stones will remain together as earrings.”

A collection of diamonds and gemstones, as well as signed jewels from major jewelry houses, doubled pre-sale estimates to realize a combined total of $15,899,550.

A ruby and diamond brooch and ear clips by Van Cleef & Arpels sold for a combined total of $477,551.

Overall, the auctioneer said there was a sell-through rate of 90 percent, with three lots selling for over $10 million, and five lots sold for more than $5 million.