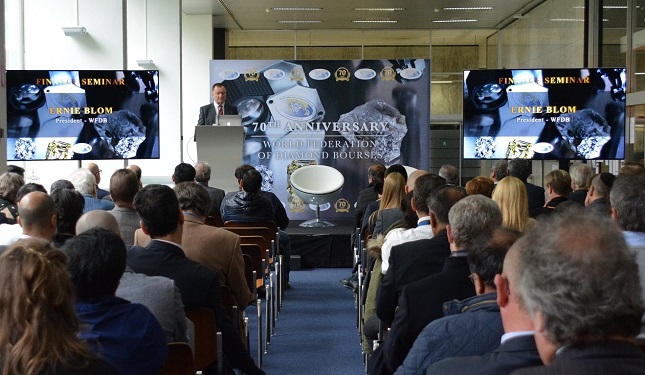 (IDEX Online) – The World Federation of Diamond Bourses' (WFDB) Executive Committee members, together with leading officials from the Belgian diamond industry, have held a joint celebration of the organization's 70th anniversary in Antwerp, as well as taking part in a finance seminar and marking the 570th anniversary of the city's diamond history.

The 70th anniversary celebration took place at Antwerp's MAS Museum, which tells the story of Antwerp and its history, and staged a special 'Dazzling Desire' exhibition to mark the event.

The anniversary event was hosted by AWDC CEO Ari Epstein who delivered a speech praising the work of the WFDB. Ernie Blom, President of the WFDB, spoke of the historic and continuing role of the international body in working for the good of the global diamond industry and the importance of the WFDB's establishment in the aftermath of the Second World War in 1947 which had caused such destruction. He also spoke of the critical role played by Antwerp in the global diamond trade for almost six centuries. "Antwerp has long been the world's leading diamond trading centre. Tonight we look back 570 years to 1447 when the diamond business was established here and congratulate you for continuing this extraordinary story," Blom commented. Other speakers included Koen Kennis, Alderman of the City of Antwerp, Philippe Barsamian, President of the Federation of Belgian Diamond Bourses, and Vera De Boeck, curator of the MAS Museum.

Speaking at the Finance Seminar, Blom said: "It is no secret that finance remains the main challenge for the global diamond trade. Our members are simply not receiving enough credit in order to run and expand their businesses because the banking community is putting too many obstacles in the way by wrongly regarding the diamond industry as high risk. This is ironic because the diamond trade is overwhelmingly comprised of company owners who run their businesses in a highly responsible and prudent manner. We need to find solutions to this issue. We need solid proposals that will enable us to bring about concrete action to help our members across the world." Also speaking at the seminar were Sabine Smets, Head of ABN Amro's Diamond & Jewellery Clients for Belgium, and Chris Ellis, Managing Director of D-Fin, who both took part in a question and answer session with attendees.

The WFDB's Executive Committee's agenda included a discussion of the World Diamond Council's draft System of Warranties, and the need for an educational program so that diamonds will be called as such without the need for the word "natural" beforehand. The Committee also discussed the proposed work of the International Diamond Monitoring Committee which was created by the GJEPC and the Bharat Diamond Bourse in July and the WFDB's support for the body.

ExCo members then went on to discuss a revision of the WFDB's By-Laws and Inner Rules. Once finalized, the proposed draft amendments will be sent to the bourses for review with the aim of presenting them and having them accepted at the next World Diamond Congress which will take place in Tel Aviv from July 2-5, 2018. Finally, the Committee heard that an application had been received for membership of the WFDB from the Associacio Diamantiers in Portugal.