(IDEX Online News) – The IDEX polished diamond price index was stable in September, declining only very slightly during the month. 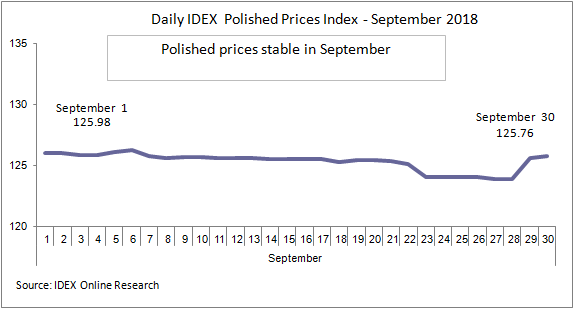 The major event for diamond traders at the major trading and manufacturing centers last month was the hugely important September edition of the Hong Kong Jewellery and Gem Fair.

Known for being a show where business is transacted – especially for the local market and for Mainland China – the event is an important barometer of the health of the global diamond, gemstone and jewelry industry.

However, many diamond traders either didn't make it or brought forward their departure dates due to Typhoon Mangkhut which tore into the city and brought the loose diamond part of the show at the Asia-Expo near Hong Kong's international airport to an end a day early.

October sees the second edition of the Bharat Diamond Week (Oct 8-10). Organizers of the polished diamond fair, being held at the Bharat Diamond Bourse, said they expect to see many buyers who were not able to carry out all their appointments at Hong Kong fair.

Meanwhile, October is also important since it marks the start of the holiday sales period. Retail sales in the US are expected to be strong – with a rise on the figures for 2017 – due to the strength of the American economy.