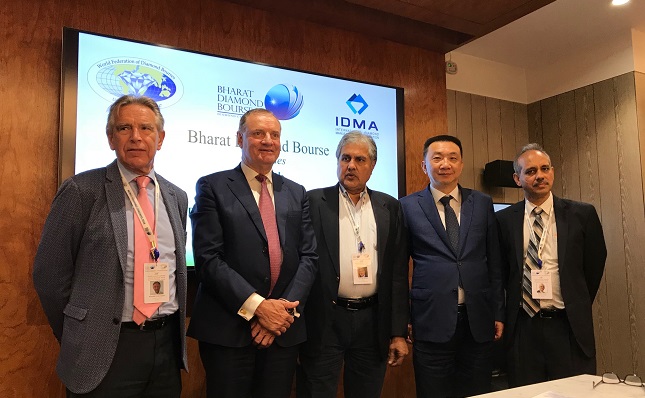 (IDEX Online) – World Federation of Diamond Bourses (WFDB) President Ernie Blom called on exchange presidents and members to join hands to boost the global presence of the trade organization at the conclusion, on Thursday, of the 38th World Diamond Congress at the Bharat Diamond Bourse (BDB). The WFDB is clearly the most important representative body in the global diamond trade, but needs to think how it can bring added benefits to members, he said.

"Each president and member is an ambassador for the WFDB and the diamond trade and the good that diamonds do and needs to communicate this both in the countries in which they operate and when abroad. We have an enormous amount of knowledge, experience and intellect among our presidents and that should be used to find ways for us to further boost our global role," adding that Israel Diamond Exchange President Yoram Dvash had agreed to lead the project.

Blom also announced that during his fourth two-year term in office, he would be pushing a succession planning policy to ensure that younger members of the diamond trade are brought on board and become active in the running of the organization. "It is imperative that we all work to bring this about. There are many excellent younger members of the trade, both men and women, across the globe and we must help to groom them for positions of leadership."

Blom also told the meeting that an additional layer of administration was needed to deal with an increased workload.

On the challenges the diamond industry faces, Blom said bourses must be forceful in dealing with people found to be breaking the rules. "Every president and bourse must have zero tolerance for this activity and this must be clearly communicated."

Blom also commented on Know Your Client programs which, he said, were extremely important to the industry and which can help diamond firms become even more transparent. In addition, responsible sourcing has become a standard element of operations and members should embrace it.

The final day of the Congress also saw a meeting of the WFDB's Young Diamantaires initiative led by Promotion Committee Chairman Rami Baron of the Diamond Dealers Club of Australia, with more than 200 younger members of the Bharat Diamond Bourse attending the gathering.

WFDB President Blom: World Diamond Congress One Of Most Important Ever