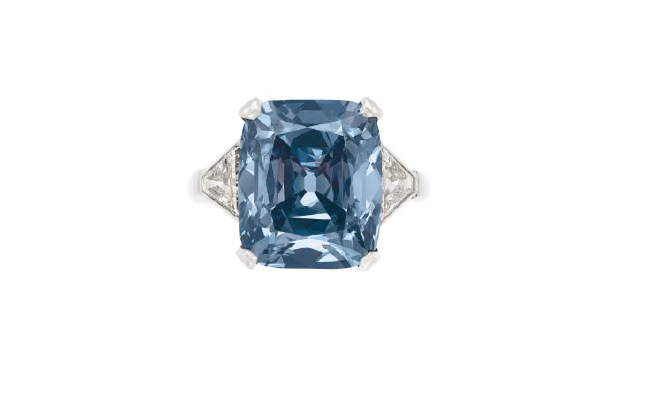 (IDEX Online) – A ring made by Bulgari and set with fancy vivid blue diamond weighing 8.08 carats was sold for $18,312,500 at Christie’s New York Magnificent Jewels auction.

The auction generated sales of $69,225,750, with 95% of items sold by value and 83% by lot. Christie’s said the blue diamond was among the finest such stones ever to have come to market.

The Diamond ‘Tube’ Bracelet by Suzanne Belperron achieved an auction record for the designer, selling for $852,500, after six minutes of competitive bidding.

Noteworthy results were also achieved for Art Déco pieces by Cartier, with many lots greatly exceeding their estimates. Additionally, strong prices were achieved for the selection of emeralds and Kashmir sapphires.

The New York auction concludes Christie’s global jewel auction season. Landmark sales included The Winston Pink Legacy, which achieved a new world auction record price per carat for a pink diamond, selling in Geneva for $50,375,000 (price per carat $2,656,909); and the Hong Kong sale of The Peacock Necklace, which sold for $14,959,870, establishing a world auction record for a Kashmir sapphire necklace.