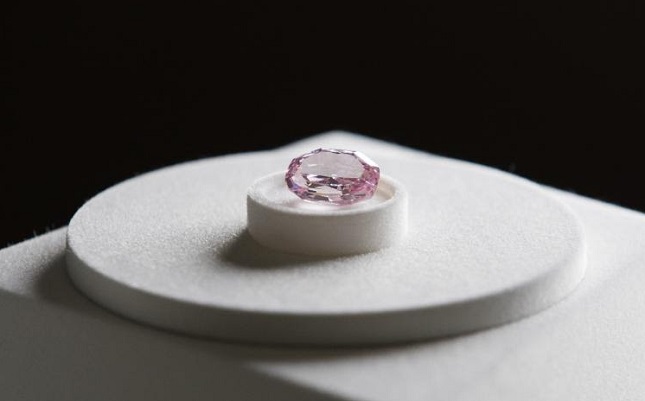 Before it was mined, ALROSA's largest pink gem had weighed 3.86 carats.

"Pink diamonds along with blue ones are considered to be the rarest and most precious of all, and the size and clarity of this specimen makes it one of the best to be discovered anywhere in the world in recent years. I am sure that this diamond will be the most expensive in the history of Russia's gem cutting industry," said Yury Okoyemov, Deputy CEO of ALROSA.

The largest stone in the exhibition was a deep yellow Asscher cut diamond, weighing 20.69 carats. It was cut from a rough stone with a rare honey hue, which weighed 34.17 carats and was the largest yellow diamond mined in Russia in 2017.

The pink and yellow diamonds will be soon transferred to GIA for grading.

Among the other diamonds displayed in the collection, highlights included a pink purple cushion-shaped stone weighing 11.06 carats and recognized by the GIA as the largest of its color in the world.

Okoyemov said: "The diamonds we are exhibiting are unique, and each of them perfectly embodies the Russian art of gem cutting. And more than half of the several dozen colored gems are large diamonds with fancy hues - the rarest and most beautiful type of diamond. To put it more clearly - out of every 10,000 natural jewelry-class diamonds mined, only one is colored, and large colored diamonds are even rarer. According to market analysts, the average price for colored stones has risen consistently by 12% a year over the last few decades. We calculate that the huge potential of its resources will very soon enable ALROSA to become the leader in the international market for colored diamonds."