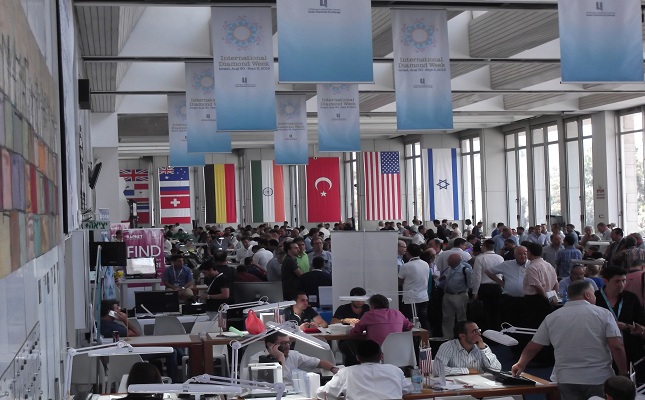 (IDEX Online News) – The issue of credit and liquidity appears to be foremost in the thoughts of buyers at the Israel International Diamond Week, which is currently taking place at the Israel Diamond Exchange.

The announcement of bankruptcies in the Israeli industry last week had a deflationary effect on the atmosphere at the show. There was also a sense of prudence and caution, reflecting the global market conditions over the last 18 months or so.

Most buyers agreed that there was a need to strike a delicate balance between selling in order to generate liquidity and get business moving, and at the same time, being cautious about credit.

Wholesalers, buyers and manufacturers agreed that customers principally bought only enough stock for what they think that they will be able to sell relatively quickly, rather than building up their stocks, a trend that has been ongoing for some time.

Isaac Zwiebel from New York said he had sold rounds, pears and marquise diamonds. “I did not bring flawless or VS diamonds this time, which I am quite pleased about,” he said. “June was a good month for us, but July and August was quieter.”

Haresh Malaviya from Hari Krishna in India said prices were quite strong in pique goods in the SI3- I2 I/II range. He added that the liquidity factor was exacerbated by a fear of the fluctuation in the current price of rough. Malaviya was hopeful, however, that business would be good at the upcoming Hong Kong Gem and Jewellery Show.

One Israeli manufacturer mentioned that trading had been quite healthy and that buyers bought at or near list price., adding that his company’s specialty of baguette square cut and emerald cut diamonds was quite niche.

Leibish Polnauer of fancy color diamond specialists Leibish and Co. said that in his opinion, the market was not in such bad shape, but that there was a tendency for the industry to respond to negative sentiments. “Sometimes the mood does not reflect the actuality,” he said.

He noted that Leibish and Co. has been selling bigger ticket items and have seen more activity for finished jewelry, rather than loose stones. He said the strongest category of sales was yellow diamonds in the 2-3 carat range.

A Turkish manufacturer, now based in the US said that the opening of the GIA diamond synthesis center was a good idea. He expressed his worry about the effects of lab-grown diamonds on his business, and said that he thought it would be beneficial if the GIA could keep one step ahead of lab-grown manufacturers.