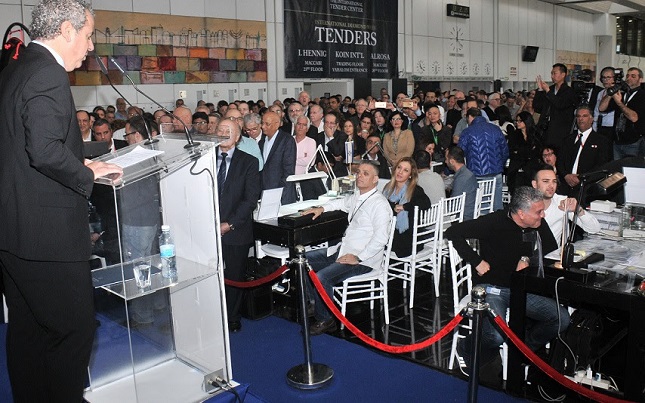 (IDEX Online) – The Sixth International Diamond Week in Israel (IDWI) opened on Monday at a packed trading hall at the Israel Diamond Exchange (IDE) with the participation of some 400 buyers from 30 countries, and over 200 diamond companies exhibiting from Israel and abroad.

IDE President Yoram Dvash said, “I am pleased to see the huge turnout of friends and colleagues from Israel and abroad. We are here to do what we love – to buy and sell diamonds. And that’s what we hope to do as much as possible during this week.”

Dvash mentioned the improved trend in the Israeli diamond industry, citing the tax agreement with the Israeli government, expanded online marketing opportunities, new manufacturing facilities and the international tender center to open during the week.

He thanked the Israeli exhibitors and the organizers as well as the visitors from abroad, including delegations from Hong Kong, China, the U.S. and Italy.

Alrosa President Andrey Zharkov surprised the audience by opening his remarks in Hebrew, and said that he feels at home every time he visits. He said that Alrosa would be holding an auction during the IDWI of large, high-quality rough and polished stones that are especially suited to the Israeli market.

Later in the day Zharkov gave a talk before leading Israeli diamond companies. He said that Alrosa is committed to strengthening ties with the Israeli diamond industry, and cited the importance of the 2015 Memorandum of Understanding (MOU) between Alrosa and IDE to share information and cooperate on issues of mutual interest. Zharkov added that Israel is one of Alrosa’s three main markets as a major buyer of high-quality, large diamonds.

IDWI 2017 will feature several additional important events. These include the opening of the new International Tender Center, the signing of an MOU with the Hong Kong Jewelry Manufacturer’s Association and a talk by Diamond Producers Association CEO Jean-Marc Lieberherr about the organization's generic diamond marketing work.

Pictured above: IDE President Yoram Dvash speaking at the opening ceremony. Below: The IDE trading hall where the International Diamond Week in Israel is taking place.

Buyer Registration for Int'l Diamond Week in Israel at Record, Closing on Feb 3