The full analysis and statistics on jewelry industry inflation for July 2013 is available to IDEX Online Research subscribers and IDEX Online members here. 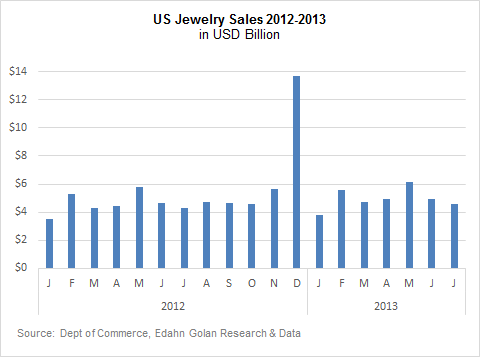 The continually improving sales results are outpacing the rise in overall retail sales increases, which stood at 7.2 percent in July. This is viewed as a sign of an improving U.S. economy and an increase in discretionary spending by American consumers.

Total retail sales, excluding autos, increased by a robust 5.8 percent year over year and 1.4 percent compared to June. This means that American consumers are increasing their spending in general, and on jewelry and watches in particular.

Jewelry sales alone, without watches, totaled $4.6 billion in July, rising 6.1 percent year-over-year. After maintaining sales increases of at least 6.5 percent (and as much as 10.9 percent in April), monthly jewelry sales fell for the first time below that level.

According to our preliminary figures, sales in August exhibited even lower sales increases, which may indicate a possible change in direction after the strong performance that greatly outpaced the general U.S. economy.

American consumers are voting with their wallets – and showing a growing interest in jewelry in 2013. This is important news for wholesalers and suppliers, such as diamond manufacturers, who have concluded that the U.S. is not a growth market.

The rise in sales, especially compared to total retail sales, is reason to be optimistic. However, these figures are for jewelry as a broad category – gold, fashion, silver and diamond jewelry all lumped together. An examination of wholesale loose diamond sales, which are far from growing at the same pace as overall retail jewelry sales, indicates that diamond jewelry are possibly losing market share within the broader jewelry category.

Until we have those sales figures, we can take comfort in the knowledge that American consumers have not lost their appetite for jewelry, and opportunities are clearly still there.

The full analysis and statistics on jewelry industry inflation for July 2013 is available to IDEX Online Research subscribers and IDEX Online members here. Click here for more information on how to subscribe or become a member.

IDEX Online Research: US Demand for Jewelry Grows 12.2% in April